Rampage Jackson fights onto your smartphone via app

For those of you that are fans of the Ultimate Fighting Championship or UFC, which has been running since 1993 now will have heard of Quinton Ramone Jackson, otherwise known as Rampage Jackson and today we have news of his official smartphone app.

Rampage Punch is brought to you by MEDL Mobile, Inc., and is available for users of the Android and iOS platforms, and if you can think that you can throw a punch like Rampage Jackson, this app will help you find out. This recently released application will judge your punches and provide you with real feedback from Rampage himself.

The application uses the latest technology to gauge your punches to see how hard you can hit, and then it will help you hit both harder and faster accompanied with audio feedback from Jackson himself. To use the application users have to grab their mobile device and choose a material that they want to strike with their gloves, and then with their mobile device in hand hit away.

Rampage Punch will then record your reaction time along with your all important punch force, and then will give you an overall punch percentage rating. Users will quickly find out if they punch like a champ or like a chump that couldn’t strike their way out of a paper bag.

Both versions of the application have already received a large number of positive reviews from users that have already been enjoying the app. Below you can see a video of Rampage Jackson demonstrating the app. Rampage Punch is available on the App Store for only Â£0.69/$0.99 for owners of the iPhone, iPad, and iPod Touch running iOS 4.3 or later, and Android users can find it via Google Play for Â£0.62. 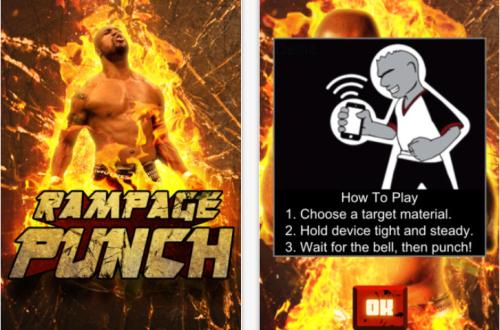