There seems to be a lot of news today concerning Apple and in particular moves by rivals to step up the competition against the company. We have news today that Netflix, which has now become the dominant U.S. online movie service, has now pushed Apple off the edge of the online movie cliff.

Hot on the heels of news that Samsung is going all out in a bid to compete against Apple’s iOS by joining the Linux Foundation, we find that Netflix powered past Apple’s iTunes in 2011 and is now the largest online movie service in the US by revenue. In 2011 Netflix’s market share grew to 44%, an unbelievable rise considering the company had only a 0.5% market share in 2010. The rise came at the expense of Apple whose share fell from 71.5% in 2009 to 60.8% in 2010, right down to 32.3% in 2011 despite growing revenues.

News of these statistics came to us from BGR and the data was gathered for a recent report by IHS iSuppli, a market research company. Dan Cryan, research director for digital media at IHS, noted the overwhelming change from DVD transactions to TV-like subscriptions telling how online movie business “more than doubled in 2011 to reach $992 million and it is expected to double this year as well.”

It never ceases to amaze us how quickly new innovations in technology can grow and we’d like to hear what you think about these figures so send us your comments. 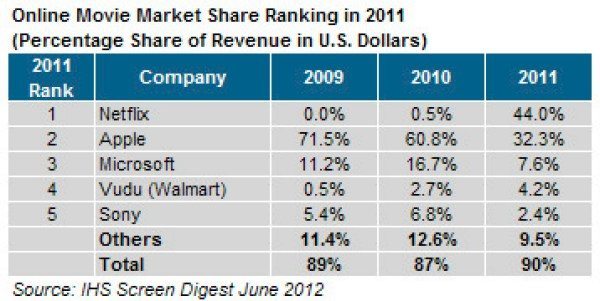