If you are a car fan and live in the UK you would have probably heard of the Goodwood Festival of Speed, which this year is running from June 28th through to July 1st, and today we have news of the official 2012 iPhone app for you.

The free application features the iconic Goodwood hill climb along with a number of other features for visitors to the event. This year’s event is being sponsored by Auto Trader that are bringing the app to fans, and it is ideal for those that are going or those that can’t make it to the event but want to keep up with everything that is going on.

It features the first Augmented Reality racing game in the UK that allows users to race up the famous Goodwood Hill Climb, which takes place in a variety of Lotus sports cars. There is also in depth content from the wide range of sponsors, videos from Goodwood, customisable timetable planner, and interactive map to give users the best Festival of Speed experience so far.

The Augmented Reality racing game has support for up to four players across different devices, which feature 3D graphics, and a news reel is constantly updated by the Goodwood team. Users are also provided with a detailed map of the festival, live Twitter tracker providing all the gossip, lap time leader board, find my car feature and events calendar with customisable planner.

Goodwood FOS can be found as a free download from the App Store, and the app requires an iPhone (3Gs models and above), iPod Touch 3G and later, and iPad 2 running iOS 4.3 or later. 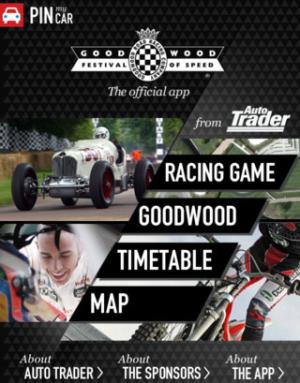