If there is one thing you can rely on here in the UK it’s our weather, you can be sure that as soon as an outside event comes along the good ole British weather will take a turn for the worse and start bucketing down. It’s nothing unusual for a festival to see rainy days, so with that in mind, Vodafone is working on a solution so that you can stay dry whilst charging you smartphone along with gaining a little 3G signal boost.

According to the guys over at Ubergizmo, Vodafone has come up with a prototype umbrella that can boost 3G signals wirelessly along with charging your smartphone, and gets its power via solar panels in the umbrella’s canopy. Originally called the Voda-brella, and designed by Dr. Kenneth Tong of the University College London, the Voda-brella is now called the Vodafone Booster Brolly.

The Vodafone Booster Brolly is in the concept stage, and Vodafone has said that the umbrella’s electrical current generated by the canopy panels powers a micro antenna that boosts a 3G signal, and also comes with a hands free smartphone cradle along with an LED torch.

According to Dr Tong the Vodafone Booster Brolly has “12 lightweight amorphous silicon triple junction solar cells that have the ability to convert light into electricity through a series of highly sensitive photovoltaic semiconductors. The current generated is then transferred via a voltage regulator to the handle of the umbrella, where it is stored safely in high capacity rechargeable batteries, or used to directly charge a mobile device through a USB port.”

The Vodafone Booster Brolly weighs roughly 800 grams, and has been developed in conjunction with Vodafone VIP, and apparently Vodafone will be testing the mobile phone charging, signal boosting umbrella next weekend during the Isle of Wight Festival. 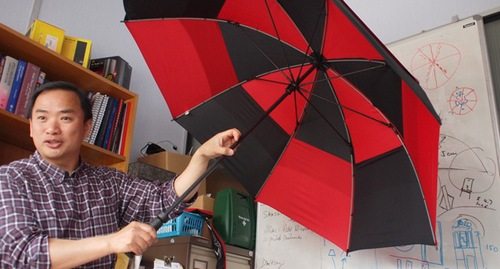