We’ve been discussing RIM’s BlackBerry platform quite a bit lately and especially the importance of the forthcoming BlackBerry 10 OS. After recent poor sales and the downward spiral of BlackBerry it seems that the release of BlackBerry 10 due around October is the company’s last hope of regaining popularity in the smartphone market. Today we have some first impressions of BlackBerry 10 and a video for you to take a look at.

Recently we told how there seems to have been little real product news from BlackBerry recently leading to concerns about a questionable future for the once dominant platform. Although the company is placing a huge amount of emphasis on the BlackBerry 10 OS and the subsequent devices that it will bring, we have wondered if it will be too little too late, therefore it was interesting to find out a little more about what BlackBerry 10 OS will bring.

Although BlackBerry 10 was shown off in May, hands-on looks weren’t possible at that time but now Engadget has managed to get a real look at the upcoming OS with a demo of the software on a dev unit and also provided a video that you can see below this story. They were shown two devices running BlackBerry 10 and guided through by Gary Klassen, principal architect for RIM, but note the software is very much unfinished at this stage and not sufficient enough to ascertain what the end-user experience will be like. The three key areas that RIM is touting about the new operating system this early on are the keyboard, camera and app-switching.

Starting with the keyboard, this is a hugely important part of BlackBerry 10 as so many users have preferred BlackBerry’s QWERTY physical keyboard and the new OS and its touchscreen keyboard will need to impress. So far, so good as Engadget noted its simple and intuitive use, clear layout, large enough letters and swipe actions. A swipe up from the lower left corner will minimize the keyboard. BlackBerry still seem unsure if the new OS will feature haptic feedback although Engadget says that many people probably won’t be that bothered. Ultimately regarding the keyboard it seems pretty positive but whether fans of the physical QWERTY keyboard are won over remains in question.

Looking at applications it was clear that transitioning between apps was a fluid experience. The app grid can be seen on the left side of the homescreen and once any dormant applications are launched they will pin to the homescreen displayed in a 4 x 4 layout alongside apps that are currently running. Actions are stacked side-by-side and because app switching is so clear it’s easy for the multi-tasker to check back through the workflow. When receiving incoming notifications if you drag the bottom right corner the current window is shrunk and icons will slide in from the right.

The hands-on experience didn’t show much more than this yet and when questioned, RIM reps were reluctant to share any further details. Of course they will only want to show what they think will gain positive comments at this stage and who can blame them when considering that BlackBerry 10 has a massive weight on its shoulders for the expectations of the company.

We’d like to hear your thoughts on BlackBerry 10. If you take a look at the video below this story, are you impressed with what you’ve seen so far? Do you think that seemingly placing the whole future of the company on a new OS is a risky strategy by RIM, or do you think this could pay off? Send your comments to let us know. 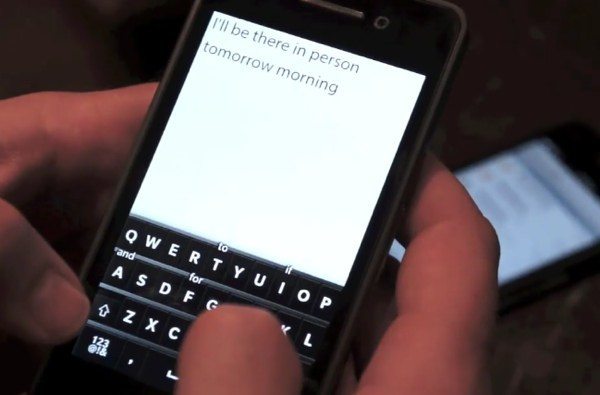