We’ve been following the ailing fortunes of RIM’s BlackBerry platform and have noted many times recently that the company seems to placing all bets on the upcoming BlackBerry 10 OS, due in the fall. Although we’ve heard dribs and drabs of rumored BlackBerry 10 handsets today a leak has seeped out further information about what have been dubbed L-Series and N-Series phones.

We recently gave readers a demo look with first impressions of BlackBerry 10 and then also gave readers news that the first BlackBerry 10 handsets would not feature physical keyboards although these would come to future BB10 phones. For those who prefer a physical QWERTY keyboard layout there’s good news as this new leak includes a hardware keyboard model, although it does look as though this won’t come until some months after the touchscreen phone. The leak refers to two models of handset one previously dubbed London and the other Nevada.

According to Pocketnow, sourced from N4BB, the London is now referred to as the L-Series and this handset is a full touchscreen device. If the leak is accurate, the L-Series will have a display of around 4.2-inches diagonally with a resolution of 1280 x 768 packing in a pixel density of 356ppi. The width across the L-series handset is said to be 53mm.

Taking a look at the Nevada, now called the N-Series, and this will be the BlackBerry 10 smartphone that still features a physical QWERTY keyboard. Apparently the screen size will be around 3.1-inches with a resolution of 720 x 720 and 330 ppi and it looks as though the N-Series will make use of OLED display components. We should remind you that none of these specs and features are confirmed yet.

The full touchscreen L-Series phone is likely to launch in early September, around the time of course that the BlackBerry 10 OS will be ready to unleash. The QWERTY keyboard N-Series is not likely to release until Q1, 2013. Do you think BlackBerry 10 and subsequent devices running it can save the BlackBerry platform? What are your initial thoughts on the L-series and N-series handsets? Let us have your comments. 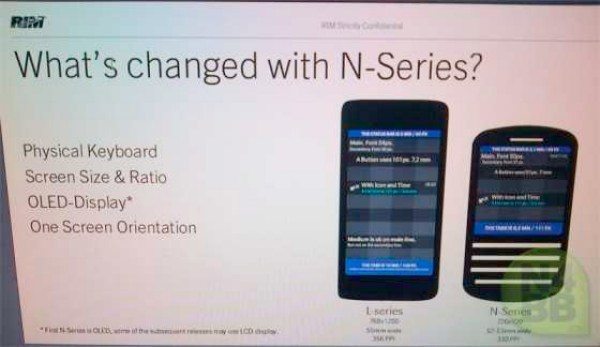