There’s not long to go before Google I/O 2012 kicks off in San Francisco, in fact there’s only two more days to go, and the word is during Google I/O 2012, Android just might gain a mobile app that has thus far been only available to those on the iOS platform, and that app is Pinterest.

Of course as the Android faithful know, Pinterest for Android isn’t available, well not yet anyway, but one can presume by this information being in the Google I/O app that Pinterest could possibly hit the Android platform during this year’s Google I/O event.

For those that might not be aware, Pinterest is a type of virtual pin-board, whereby the user can stick notes to get organised and such. Users can pin just about anything they can think of that would normally be pinned to a pin-board, and do the same virtually with the Pinterest app.

Over at the Pinerest website they do state that currently you can’t use the Pin It bookmarklet on an Android device, however they are working on a dedicated app for Android, and once they feel it’s in the final stages of development they will share the info. So it would appear Pinterest have been working on an Android app for a while, and it looks like the Android faithful will find out for sure at Google I/O 2012. 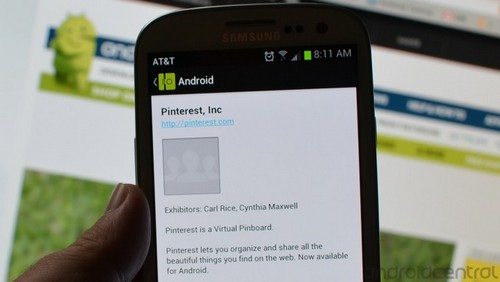