Well I’m sure you know that Google’s event has begun and that the rumoured Goggle Nexus 7 tablet is now a reality and should be coming out to play in the mobile space next month, and will of course be sporting the latest Android operating system, Android 4.1 Jelly Bean, and as usual with these things, the Nexus 7 has now been compared to its rival slate, the new iPad.

Naturally, we have that Google Nexus 7 versus the new iPad comparison video for your viewing consideration below, which comes our way courtesy of the guys over at Slash Gear who managed to get hold of the Android Jelly Bean slate to compare it with their iOS slate.

Spec wise, I’m sure you already know all about the new iPad, so wont go over them here, as for specs of the Google Nexus 7, the device sports a 7-inch backlit IPS touch screen along with a 1.3Ghz NVIDIA Tegra 3 quad core processor, 1.2 megapixel front facing camera, not rear facing snapper, 720p video, WiFi, Bluetooth 4.0, NFC, GPS, and a 4325mAh battery.

Price is certainly a factor when it comes to choosing a tablet, and well the new iPad can be somewhat costly as the iOS slate has a starting price of $499, whilst the new Google Nexus 7 commands a very reasonable price tag of $199.

Anyway, enough from me rattling on, I’ll leave it right there and let you head on down to mash that play button and check out what the guys have to say in their comparison between the Google Nexus 7 and the new iPad…enjoy. 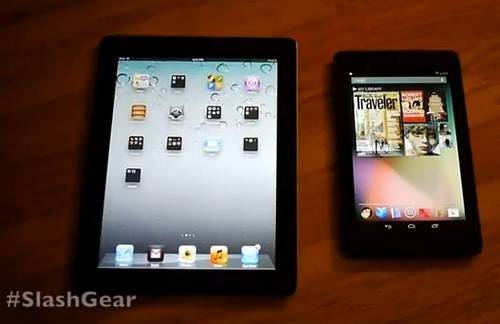