Since Google I/O 2012 took place last week we’ve been unraveling all the announcements with details of the new Android OS, 4.1 Jelly Bean, the Google Nexus 7 tablet and more. It seems that every day more things are revealed and today we have news about a Gear4 speaker dock accessory with Jelly Bean loving that could well appeal to many Android enthusiasts.

If you’ve been following the news about Android 4.1 Jelly Bean you’ll know that it will be arriving in mid-July and the first device to be launched with it will be the Google Nexus 7 tablet. You may feel jaded at the amount of speaker docks out there but the Gear4 dock differs from others as became apparent when Engadget spotted it at Google I/O. Instead of the sound playing through the headphone jack or wirelessly over Bluetooth, it was playing audio digitally by means of the USB port.

This development could mean massive changes in accessories on the way. The fact that Jelly Bean supports USB audio is big news and the Gear4 Clock/Radio Connect speaker dock, which obviously also features an alarm clock radio, is the first to demonstrate this. Jelly Bean will enable app audio to be routed to the USB port, but this has not been possible pre-Jelly Bean. Usefully, Gear4 has taken this into account and will enable audio to be played through the USB port on legacy Android devices with the use of a special app that comes with the speaker dock.

Engadget also had some hands-on time with the Gear4 speaker dock and a video that you can see below this story demonstrates this. The video shows the Gear4 Connect being used with the new Google Nexus 7 tablet and it’s pretty impressive stuff. Why not take a look for yourself and tell us what you think of this Jelly Bean accessory? Are you impressed with what you’ve seen and heard about 4.1 Jelly Bean so far? Let us know with your comments. 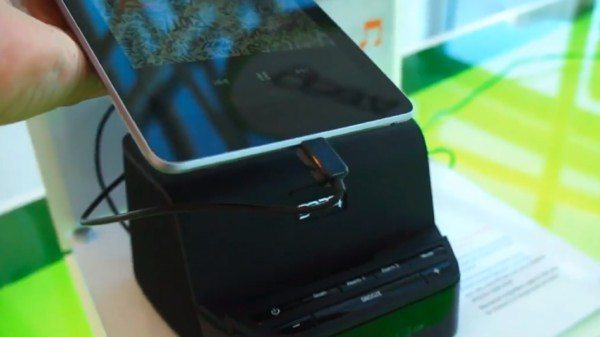