Sony continues to expand on their Xperia range of devices, and for those Xperia fans over here in the United Kingdom, who may have been waiting to be able to slap in a pre-order for the Sony Xperia Miro handset, you might like to know that you can now do so if you wish.

According to the guys over at Unwired View, if you are in the UK and would like to pre-order the Sony Xperia Miro as an unlocked and SIM free smartphone, you can now head on over to Clove, who have now started taking pre-orders for the Android Ice Cream Sandwich packing handset.

The Sony Xperia Miro from the UK retailer has its price set at Â£102 inclusive of VAT, which is roughly 197-bucks, although they do mention that the official price for the smartphone might differ, and currently there’s no hard and fast word on just when the Sony Xperia Miro will begin shipping, but it shouldn’t be too long.

So there you have it, if you are in the market for the Sony Xperia Miro as an unlocked and SIM free device, you can hit up Clove and pre-order the Android handset. Will and of our UK readers be placing a pre-order for this ICS smartphone? 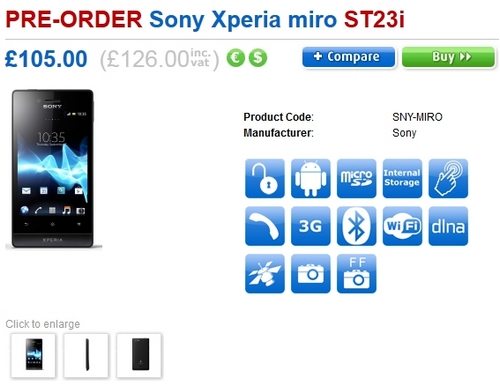