The thing with owning tech gear is that its fine if your tech gear breaks down when the warranty is in place, but more often than not it will break down after the warranty has run out, and fixing whatever tech gear has decided to give up the ghost can prove costly if you call in the experts. However, I am sure most have heard of the iFixit guys, they have provided the mobile space with many a teardown of smartphone and tablets, and now you can access their manuals via their mobile app.

For those that like to have a go at repairing their tech gear when it goes wrong there is the iFixit: Reference manual app that offers thousands of step-by-step instructions on how to fix your broken tech gear along with the ability to download guides for offline browsing.

Of course you don’t have to be in need of a repair to make use of the iFixit: Reference Manual app as many simply enjoy finding out what it inside a smartphone, tablet, Xbox, PlayStation, camera, a vehicle and the like to see what makes them tick.

The iFixit: Reference Manual mobile app for iOS, Android, and for WebOS, deliver the know how on repairing such tech gear as the iPhone, the Macbook, Macbook Pro, Apple iPad, PC laptop, dozens of digital cameras, hundreds of mobile phones, Harley Davison repair and more. 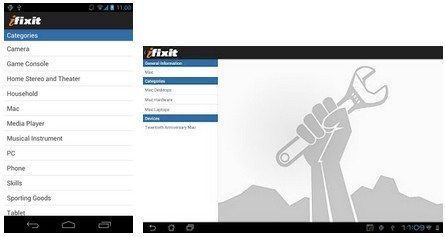