Over in the good old US of A the Android faithful that prefer Samsung devices are still waiting for Samsung’s latest and greatest smartphone, the Samsung Galaxy S3 top come out to play on the Big Red, which was supposed to happen tomorrow the 10th of July; however it looks like those Verizon customers wanting the Galaxy S3 will be a little disappointed if they still expect to get their hands on the device tomorrow.

Apparently there will be a slight delay to the Verizon Samsung Galaxy S3 becoming available, as according to the guys over at Engadget, the Big Red website states that the Android Ice Cream Sandwich smartphone will not be available on the 10th but will become available as of the 12th of the month.

Having said that, the word is some customers have already had their Samsung Galaxy S3 shipped, whilst some have also said they are in possession of the new Sammy smartphone, which would suggest that pre-orders are as the previous schedule. So feel free to let us know if you have already received your Verizon Galaxy S3 or if you are still waiting.

In other news, I’m sure you all heard not too long ago that someone in Ireland had stated that their Galaxy S3 had caught fire, something that obviously cause concern in the mobile space, that perhaps old Sammy had push out a handset that wasn’t up to standards.

Thus it would appear by all accounts that whomever reported the incident where the Samsung Galaxy S3 ‘exploded’ whilst mounted on their vehicle dash, it was somewhat of a scam, as apparently the handset was water damaged and the guy shoved it into a microwave to dry it out. Why anyone with a little sense would do this I’m not sure, but basically if you have been worried about your Samsung Galaxy S3 bursting into flames all of a sudden, rest assured it shouldn’t. 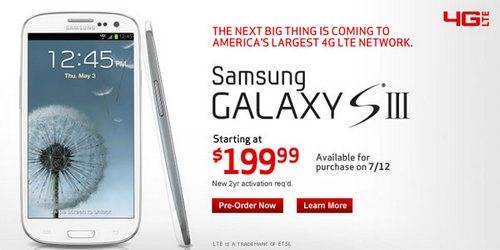