If you are over in India, you might like to know that a couple of new smartphones have been launched in the country in the form of the Spice m6688, a dual SIM handset, and the Micromax A80 Superfone handset, also a dual SIM device that runs Android 2.3 Gingerbread.

According to the guys over at The Mobile Indian, the Spice m6688 (image above) features a 3.2-inch 400 x 420 pixel resolution touch screen along with a 3.2 megapixel camera, video recording, WiFi, GPRS, EDGE, Bluetooth, 43.8MB internal storage, and microSD expansion up to 8GB.

The Spice m6688 handset also features a 312Mhz processor, FM radio, a 1000mAh battery that is good for up to four-hours talk time, and has the Comet and iHome user interface, which is the Spice propriety UI. The Spice m6688 smartphone is available right now and commands a price tag of RS. 3800.

The Mobile Indian also has the low down on the Micromax A80 Superfone (image below), which is said to sport a 9.525cm touch screen, a 5 megapixel rear facing camera, a 0.3 megapixel front facing camera, an 800MHz processor, runs Android 2.3.4 Gingerbread, 512MB RAM, 3G connectivity, and microSD expansion up to 32GB.

The Micromax A80 also features Aisha voice recognition that can update social networks, translate languages, fins weather conditions and the like, and also comes with a large 2500mAh Li-ion battery.

The Micromax A80 Android smartphone has now been launched in India and commands a price tag of some RS. 8490. So there you go, two new smartphone for the Indian public to consider. 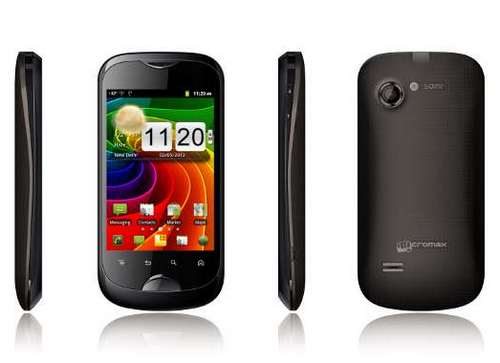