Around a week ago we told readers about a Samsung Galaxy S3 (S III) Developer Edition that would be sold with an unlockable bootloader through Verizon. Today we have further news on this as the Samsung product page for this special edition Galaxy S3 has now gone live and we also have confirmation on the price.

When the standard Verizon Galaxy S3 was launched with a locked bootloader it disappointed many people who like to use custom ROMS as well as developers, especially as previous Samsung phones had been easy to unlock. Also the other carrier variants of the Galaxy S3 in the U.S. had all been sold with unlockable bootloaders. The Developer Edition Galaxy S3 will only be available to purchase directly through Samsung and previously we speculated that it would probably cost around $600. Although that’s a big amount to lay out in one hit it does mean there’s no hassle with contracts.

The good news today is that you can now check out all the details on the Galaxy S3 Developer Edition with a user unlockable bootloader through Samsung and the price is now officially set at $599. This is for the Pebble Blue GS3 Developer Edition with 32GB of internal storage on Verizon, according to GSM Arena. The usual price for the 32GB standard Verizon version is $649 so this isn’t a bad deal. However we can’t say it’s actually available yet as although the Developer Edition page is now live there is still no release date listed and it merely says ‘coming soon.’

You can see all the details you need about the Galaxy S3 Developer Edition at this Samsung page. Remember this is not possible to order through Verizon. Were you disappointed that the standard Verizon version of the Galaxy S3 did not have an unlockable bootloader? Will you be ordering the Developer Edition through Samsung? Let us know by sending us your comments. 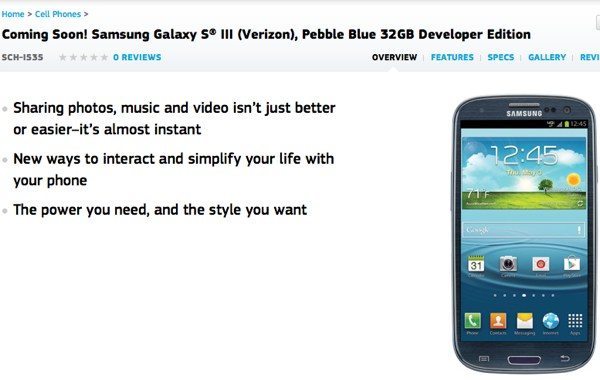