I’m sure most of the Android faithful know that the Speaktoit virtual voice assistant app has been available on the Android platform for quite some time, and has garnered roughly 3.5 million downloads. Well now Windows Phone users can also grab a little playtime with the Siri rival app, as Speaktoit has finally hit Windows Phone.

The Speaktoit app is a virtual assistant that uses natural language tech to deliver answers to questions, send text messages, find out the weather, tell jokes, shoot of emails, update your status on your social network, connect to Facebook, Evenote, Google, Foursquare, and launch applications.

Speaktoit for Windows Phone is different to Apple’s Siri as Speaktoit uses a customisable avatar rather than using a faceless voice, and has been compared to the iPhone 4S voice assistant due to Speaktoit’s task execution and capabilities.

The user can customise the Speaktoit avatar to be a blonde or brunette girl or even a handsome guy or old fella depending on your preference of course.

Speaktoit for Windows Phone has also been updated with improved stability along with several bug fixes and assistant responses are now easier to read. The Speaktoit Windows Phone app works with all devices running Windows Phone 7.5 or above. 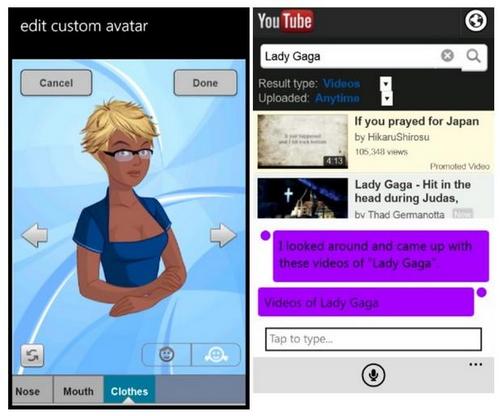