No doubt everyone in the Android space would love to see their smartphone playing nice with Android Jelly Bean, but obviously some are going to be disappointed, and it appears that if you own a 2011 Xperia smartphone and expecting to be updated to Jelly Bean, you might be amongst those disappointed.

According to an article over on Phone Arena by way of Xperia Blog, it appears that John Cooper, the production manager for Sony UK whilst holding a Q&A session on the Sony UK Facebook page, revealed that both the Sony Xperia Arc S and Sony Xperia Mini Pro will not be receiving Android Jelly Bean.

Of course there has been no official announcement from Sony as to just which of their smartphones will be updated to Android Jelly Bean, but with the comments from Cooper, it doesn’t look too good for those that own a 2011 Xperia device.

On the upside, it would seemingly mean that 2012 Xperia devices are likely to be updated to Jelly Bean at some point in the future, although again there is no real conformation as to which 2012 devices will see the update.

Any of our readers that own a 2011 Sony Xperia smartphone disappointed at this news? 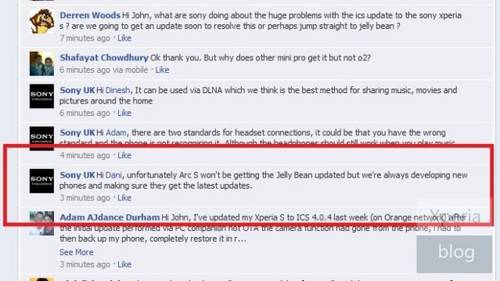