It appears that BlackBerry maker Research In Motion isn’t quite ready to step out of the tablet space, despite BlackBerry devices not fairing too well in the mobile space, and the BlackBerry PlayBook also not doing that well, as it appears that some pictures of the larger version of the RIM tablet has surfaced.

The images of the 10-inch BlackBerry PlayBook , according to Slash Gear have popped up on the Tinhte forums, although the BlackBerry slate isn’t turned on, and shows a SIM slot that is expected to be used with a 4G LTE modem.

The BlackBerry PlayBook 10-inch tablet is basically more of the same, sporting a black bezel, matte black casing, a front and rear camera of some description, with pogo pins on the bottom for a docking station, and speakers to the left and right edges of the fascia.

Just what real specs the larger BlackBerry PlayBook will sport isn’t known at the moment, but the original PlayBook packed a TI dual core processor, so there is a possibility that Research In Motion has retained the OMAP 46xx range on the bigger slate.

Apparently there is also a 4G version of the 7-inch BlackBerry tablet, which is expected to hit selves in Q4 of this year, which could mean the slate will still run the same OS as the original PlayBook rather than come out packing BlackBerry 10.

The 10-inch PlayBook was originally expected to come out to play this year, but a recent roadmap leak had the release date for the 10-inch RIM slate as sometime in Q3 of 2013, probably due to the delay with getting BlackBerry 10 out there.

Any of our readers waiting for Research In Motion to deliver the 10-inch version of the BlackBerry PlayBook, or have you move onto another tablet already? 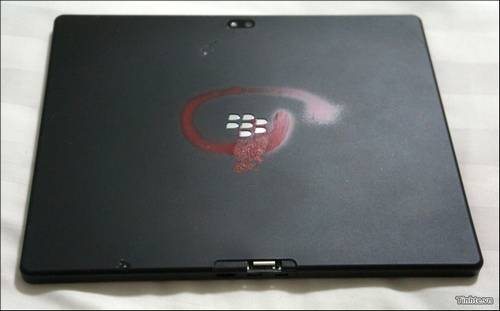