Although the Google Nexus 7 is the Android tablet of the moment there are alternatives and one of those is another for the budget-minded buyer, the Archos Carbon 97. This one won’t receive half as much hype as the Nexus 7 which runs on the new Android 4.1 Jelly Bean operating system but the Archos Carbon 97 isn’t a bad device for its price and is one you might want to consider.

The Carbon 97 has a 9.7-inch IPS display with resolution of 1024 x 768 and runs on Android 4.0 Ice Cream Sandwich and let’s remember that it wasn’t too long ago that we would have been thrilled to see a reasonably priced tablet with ICS. It may also get the Jelly Bean update at some point but that has not yet been verified. It has a single-core 1GHz processor, 1GB of RAM and 16GB of internal storage expandable to 48GB via microSD and also WiFi, Bluetooth 2.1+ EDR connectivity and full USB port

Although it’s difficult to find a reason not to buy the Nexus 7 the Archos Carbon 97 does have a couple of factors in its favor that are lacking on the Nexus 7, such as a rear facing camera and mini-HDMI port to connect up with an HDTV. Users also have access to over 600,000 apps from Google Play and some of the built-in apps include Office Suite Viewer, a World of Goo demo, News Republic and Brief Me. The price, according to Droid-Life is $249.99 with free shipping and the site also offers up a discount code of MAC45Z, which should get you $20 off the cost.

The Archos Carbon 97 is nicely styled with a brushed aluminum casing and high-gloss finish and it’s only 0.45-inches thick and weighs 620g. You can buy this tablet today direct from Archos here. We’d like to hear your thoughts on this tablet, which we think is competitively priced, and worth thinking of so let us have your comments. 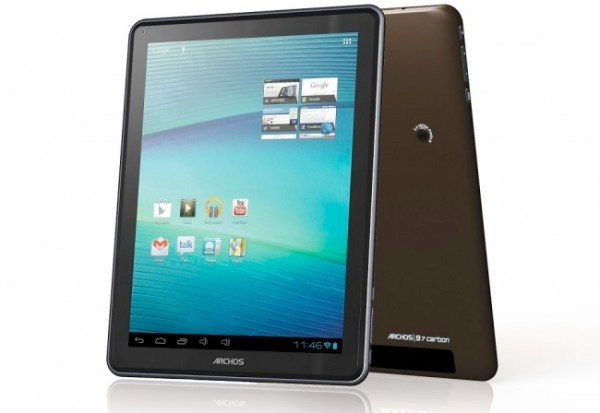