Although there was word that a premium case, travel case, and dock for the Nexus 7 tablet were on their way, these are not the only official Google Nexus 7 accessories that are incoming, as there are another five official accessories come out for the Android Jelly Bean slate soon.

Those five new official Nexus 7 accessories will be available to purchase from Mobile Fun, and include the official Google Nexus 7 Rotating Stand Case (image above), which along with enabling the user to watch a movie or play a game in landscape or read a newspaper in portrait, this rotating stand case will enable you to do so with ease, whilst still protecting your slate from damage, and will command a price tag of Â£27.95.

Then there is the official Nexus 7 Stand Case, a case that doesn’t lend itself to being used in portrait mode, so is basically for those that like to use the Nexus 7 in landscape whilst offering style and premium protection, and commands a price tag of Â£22.95.

Or how about the official Google Nexus 7 Folio Case, which delivers a case that opens like a book of course, and uses the tablet’s magnetic sensor to turn off the device when not in use, so you simply close the cover to lock your device, and the cover can be flipped back to act as a landscape stand. The Nexus 7 Folio case will become available for Â£39.99.

If you prefer using a physical keyboard with your tablet, then you might like the official Google Nexus 7 Bluetooth Keyboard Case (image below), which naturally offers an integrated Bluetooth keyboard, whilst the case itself is made of real leather, and the keyboard is dust and spill proof along with featuring an integrated desk stand, and will command an asking price of Â£79.95.

Lastly there is the official Google Nexus 7 Screen Protector, which of course protects your tablet touch screen from scratches, and is a full dry mount, along with being ‘oleophobic’ so you aren’t left with fingerprints all over your display, and commands a price tag of Â£14.95.

So there you go five new official Google Nexus 7 tablet accessories for your consideration, do any of these capture your attention enough to want one? 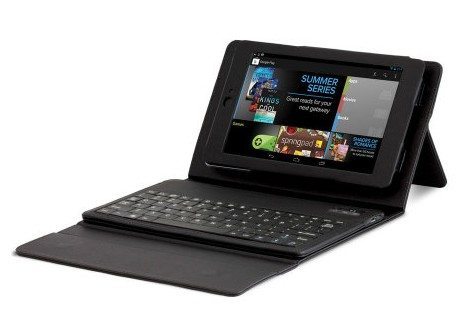