If you are in the market for a smartphone charger that uses solar power, you might like to consider the USB Solar Tree charger from Brando, that sports nine solar panels to grab the juice to charge your smartphone, which is connected to the base of the tree via USB port.

Those accompanying connectors include connectors for such devices as Samsung handsets, LG devices, Nokia I 3.5mm, Nokia II 2.5mm, miniUSB for Motorola/HTC, microUSB, PSP and the Samsung i900. If however it is somewhat overcast or raining, there still wont be any problems charging your device as the USB Solar Tree charger can also charge via AC power.

The USB Solar Tree charger features that stylish tree design along with a built-in rechargeable 3000mAh polymer battery, and battery LED indicators so you can keep an eye on the battery status, measures approximately 236 x 214 x 200mm and weighs 340 grams.

For those smartphone users that might like to save a little on their electricity bill, and would like to own the USB Solar Tree charger, the accessory commands a price tag of 55-bucks and can be purchased by hitting up the Brando website.

Any of our smartphone toting readers out there like the idea of a tree shaped solar powered charger for their device? 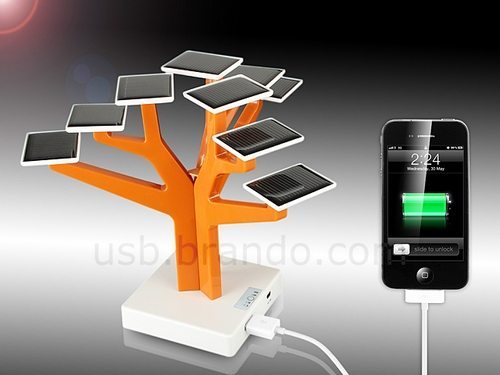