If you are the proud owner of the HTC Rezound, we know that you have been awaiting the arrival of the Android 4.0 update to hit your device for quite some time, as the Verizon smartphone was supposed to receive ICS sometime between June and July. However your wait has now come to an end.

According to an article over on Android Central it seems to confirm that the Android Ice Cream Sandwich update is now rolling out to the HTC Rezound, and is a 299MB over the air update, and will take the handset’s software version to 3.14.605.12.

Similar to other devices that have gained the ICS update, Ice Cream Sandwich for the HTC Rezound comes bundled with HTC Sense 3.6 rather than HTC Sense 4.0, which basically includes all the goodness of 4.0 but without its visual finery.

We’d like to hear from any of our readers that own the HTC Rezound to let us know if you have received the update yet, or if you are still playing the waiting game, by dropping us a line to our comments area below. 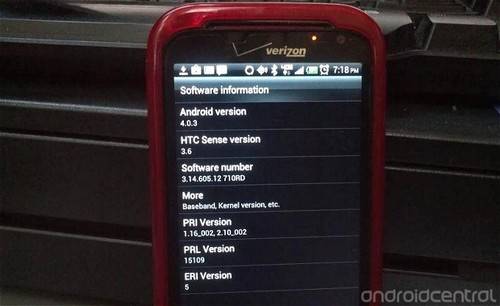