iPhone 6 concept shows Apple what new model could be

There has been a lot more rumours and speculation surrounding the next smartphone from Apple recently, but today we have an iPhone 6 concept that shows Apple what the new model could be like.

We get to see a number of concept smartphone ideas here on Phones Review, and as Concept Phones are reporting, Antoine Brieux from NAK Studio has come up with another future iPhone idea in the shape of an iPhone 6 mock up. One standout feature of the handset idea is to move the home button to the left hand side of the handset, which would make it easier to be used with the thumb.

This moving of the home button would also make more room for the display size to be increased, and in this case of the concept idea is to have a 4.9-inch display. The mock up of the iPhone 6 measures in at 125 x 63 mm, and you would have thought that the display would come packing a 1080p resolution.

The designer unfortunately didn’t reveal too many details about his creation, but as you can see in the image below the Home button can be seen below the volume buttons on the side. There is also a pair of larger speakers and the smaller 19 pin dock on the bottom, which has been the centre of speculation recently.

While the sides of the handset are metal and the back cover looks like it is covered with a glass surface. You would have thought the device would be at least a quad core handset, with a ten megapixel camera, iOS 6 or iOS 7.0, but all this depends if Antoine wants to concept idea to be 2012 or 2013 material.

Of course this only a concept idea dreamt up by a designer that has no connections with Apple, but they should actually make this the iPhone 5. Would you like the home button to be put on the side of the iPhone 5? 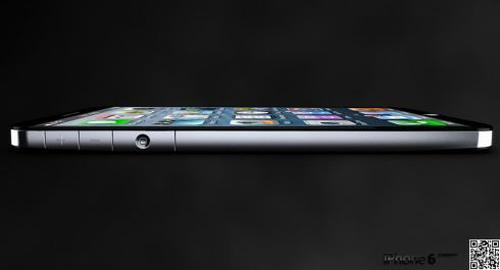