When Google first revealed the Android Ice Cream Sandwich Operating system one of the standout out new features of the software was Face Unlock, but it seems the feature for Jelly Bean is still a novelty.

The feature was found to be a little insecure on Android 4.0 as users could just wave a photo in front of the camera lens to unlock the device, but as the Android Authority are reporting Google has moved to improve things on Jelly Bean by requiring users to blink, though even this can be beaten.

With the high use of profile pictures on social networking sites that can easily be accessed, Face Unlock can be circumvented but defeats the object of having the feature to begin with. The latest version of the operating system is supposed to check that the actual person is moving, and does this by checking for a blink, and after this the handset is unlocked.

Trouble is there are ways around this even though it requires a bit of photo editing by the hacker, which is done by first finding a recent image of the user from places such as Facebook. Then using photo editing software a hacker will need to paint over the eyes with the same colour as the surrounding skin tone, and then flash the images alternately to simulate a blink.

It seems the Jelly Bean software can’t tell the difference between this and a real blink, and while users wait for Google to come up with a solution to the issue the Face Unlock feature is likely to remain a novelty on the platform. It is not recommended that users keep sensitive data on a mobile device, and they should use either a password, PIN, or pattern unlock instead.

Rival platforms also have innovative ways of securing lock screens such as the picture password feature on Windows Phone 8, and there are rumours that Apple will one day include fingerprint scanning on iOS devices after it purchased AuthenTec last month.

Do you use the Face Unlock feature? 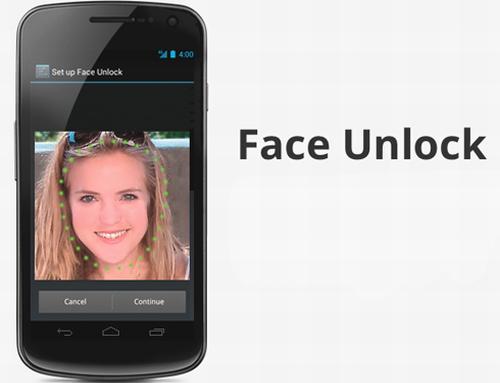