If you happen to own the webOS based HP TouchPad, and feel that you would prefer be able to run the Android OS on the discontinued slate, you might like to learn that the latest Android operating system, Android Jelly Bean has now been ported to the HP slate, albeit an unofficial port.

According to a report by ITproportal, the unoffocial port of Android Jelly Bean to the HP TouchPad comes via CyanogenMod 10, and does have several gaps in functionality including audio, the front facing camera, microphone, along with video and graphics acceleration all not working.

Which is quite a few gaps in functionality, but no doubt the CyanogenMod 10 port to the HP TouchPad will improve over time; however apparently web browsing, pinch to zoom, the keyboard, multitasking, and email are all working well.

Although the word is that some who are using the CM10 port on the TouchPad are complaining about problems with battery charging, but not in all cases.

Of course we have a video demo of Android Jelly Bean running on the HP TouchPad for our readers viewing consideration below, so don’t forget to hit that play button to check out the footage.

For those that own the TouchPad and would like to give the CM10 port a whirl on their slate, you can grab all the necessary by hitting up the XDA-Developers Forum, and of course feel free to let us know how you get on if you do so, by dropping us a line to our comments area below. 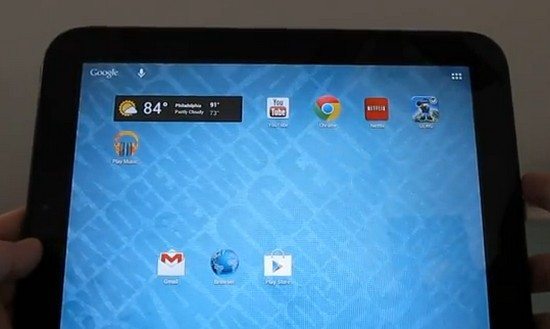