If you are a Transformers fan, and a gamer on either the iOS or Android platforms, you just might like to learn that mobile games developer ngmoco is expected to deliver a new title for both platforms sometime in September with the working title Transformers.

According to an article over on Games Radar, Transformers is a battle card game that seems to have similar design ideas and gameplay as the popular Rage of Bahamut game from Mobage, and in the new game gamers will be able to build their ultimate team of giant robots in disguise, and can play as Autobots and Decepticons.

The Transformers game for iOS and Android enables the gamer to take on campaigns along with fighting other players online. There are 2 separate story campaigns, one an Autobot path where gamers have to defend Earth, the other is play as a Decepticon to locate and strip the world of Energon resources.

During those missions the gamer will be able to gain rewards to enhance their deck, along with finding new character cards that you can add to your deck or use them as power ups; for example if you own an Optimus Prime card and fuse it with an Optimus Prime alternate transformation card it will create a more powerful character.

Apparently the developers have said that fans of the TV series will be happy to find their favourite characters appear in the over one hundred cards at launch, and regular world events will enable gamers to unlock super rare characters along with new character cards being added daily after launch.

There’s currently no hard and fast release date for the Transformers game, but it is expected to hit iTunes and Google Play at some point in September. Are any of our readers Transformers fans that will be picking up this new game once it becomes available? 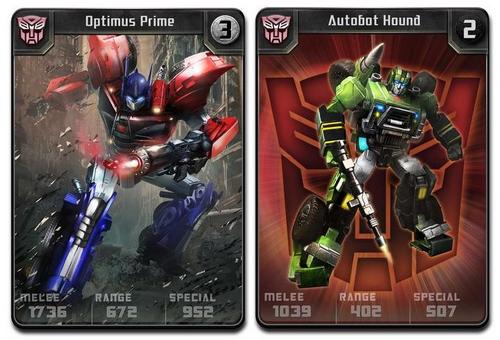