A couple of months ago Sony announced the Sony Xperia Miro smartphone, and if you are over here in the United Kingdom, and have your eye on the Xperia Miro, the release of the handset on UK shores might be close, as Carphone Warehouse now have a holding page for the smartphone.

According to an article over on Android Central, the Sony Xperia Miro is coming soon to Carphone Warehouse and you can pre-register to receive word on just when the Android Ice Cream Sandwich handset becomes available.

Furthermore on the holding page it seem to point towards the Sony Xperia Miro becoming available sometime this month, although it doesn’t actually give a firm date other than expected August 2012.

Obviously there’s no word on just how much the Sony Xperia Miro will hit your pocket for from Carphone Warehouse, however apparently other retailer pre-order pages suggest the Android smartphone will command an off contract price tag of somewhere between 180 and 210 quid.

For those that might have forgotten, the Sony Xperia Miro offers a 3.5-inch HVGA touch screen along with anti-reflection coating, a 5 megapixel rear facing auto-focus camera with LED flash, a VGA front facing camera, WiFi, Bluetooth, GPS, DLNA, an 800MHz processor, 512MB RAM, 4GB internal storage, microSD expansion up to 32GB, a 1500mAh battery, and of course Ice Cream Sandwich.

Any of our UK readers out there have their eyes on picking up the Sony Xperia Miro when it finally becomes available later this month? 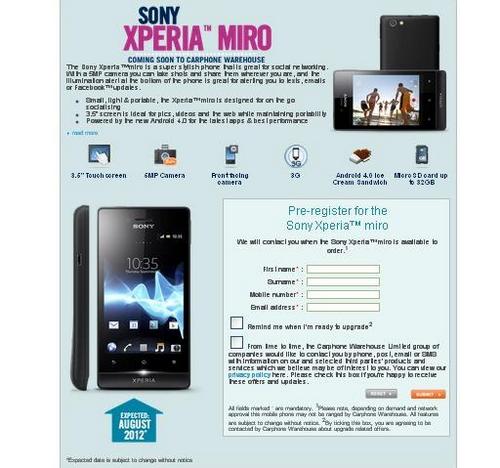