You might know that Sony has a new Xperia tablet coming out to play at some point in the game known as the Sony Xperia Tablet, and now a few images of the new Android packing Xperia slate have surface showing off the 9.4-inch display device in all its splendour with a sweet slimmed down housing.

These leaked images of the Sony Xperia slate come our way courtesy of the guys over at Slash Gear by way of Xperia Blog, and do seem to confirm that the device will indeed sport Xperia branding (image below).

The new Android tablet is billed as a Tegra 3 device with expected specs include an 8 megapixel rear facing camera along with a 1 megapixel front facing snapper, 3G, 802.11a/b/g/n WiFi, Bluetooth 3.0, GPS, SD card slot, up to 64GB of storage, and runs Android Ice Cream Sandwich out of the box.

The Sony slate is likely to also be able to work as a universal remote for TVs and other AV gear, but that hasn’t been confirmed, and visual icons on the picture include a Sony Walkman app, which shouldn’t really come as a big surprise to anyone.

The new Sony Xperia tablet retains the the same folded edge design as the Sony Tablet S; however cuts down on thickness so that the device is more consistent and less tapered, and the home screen sports the cosmic flow wallpaper that is seen on most Sony Xperia smartphones, so this could be a sign that the company is becoming more centralised with both handsets and tablets.

And that’s about your lot with the Sony Xperia Tablet, other than it is expected that Sony might get all official with the ICS slate during IFA 2012 in Berlin, Germany later in the month.

Does the Sony Xperia Tablet capture the attention of any of our Android faithful readers, and if so will you be hoping to pick up the slate once it becomes available? 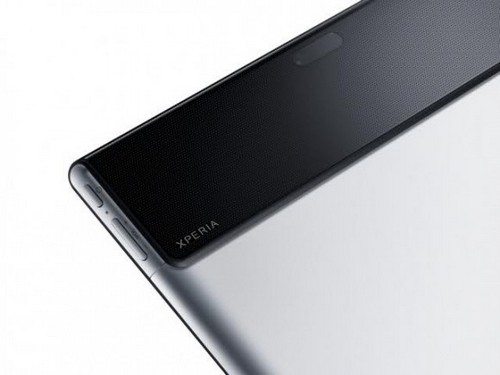