Although the latest iOS smartphone, the iPhone 5 is expected to hit in the not too distant future, Apple is still pushing out accessories for the old iPhone 4 and iPhone 4S, with the latest little accessory being a new coloured bumper case for the iOS smartphones. Originally Apple delivered the iPhone bumper case to appease the problems with antennagate, and was available in six colour options, black, pink, blue, white, green and orange.

However Apple has now decided to make available the iPhone bumper case in (Product) red according to an article over on MacRumors by way of 9to5 Mac, and the new red bumper case for the iOS handsets is available for the usual 29-bucks with a shipping time of four to six business days.

According to MacRumors, Apple offers several differing product red accessories such as red Apple iPad smart cover, red smart cases, and now a new red bumper case for the iPhone. And apparently Apple CEO Tim Cook, back in February at a town hall meeting for Apple employees states that sale of product red gear has pulled in over 50 million bucks for charity. 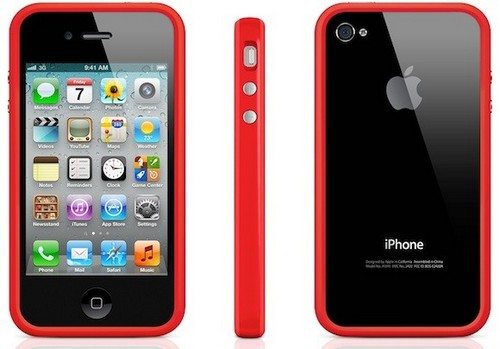 I’m sure all the iOS faithful already know that the moulded plastic and durable rubber bumper case fits all iPhone 4 and iPhone 4S handsets and fits snugly around your device, and now if your favourite colour happens to be red, Apple has that red coloured bumper case to fulfil your dreams.

Perhaps Apple has decided to deliver the red bumper case now because they believe not all will upgrade to the iPhone 5 when it finally gets released, or perhaps the new iPhone hasn’t received the rumoured design makeover, and will actually come out looking just like the iPhone 4 just like the 4S did, and thus will also be able to use the red bumper case, wouldn’t that be a shocker!