The Pros and Cons of Cordless Telephones

If you’re looking for a new telephone for your home or business one of the first things you’ll have to decide is whether you want a wired or cordless telephone. These are the pros and cons of the cordless, below covers freedom, Ability to multi-task, Expense, Less efficient, Less reliable as well as the final conclusion.

Freedom: A wired telephone can act as a chain, tethering you to a fixed point in your home or office and not letting you leave until you cut all communication with the other side. A cordless telephone on the other hand allows you to talk wherever you want. Depending on the strength of the signal you could even take your call outside or on the toilet (but please don’t).

Ability to multi-task: Since you’re not tied to your desk or sofa with a cordless telephone you’re free to go off and do anything else that only requires one hand – perhaps make a cup of tea. Of course, you can still multi-task with a wired telephone; it’s just that the extent of what you can do is much more limited. Side note: if you do happen to multi-task, make sure you’re giving your caller the attention he or she deserves!

Expense: Cordless telephones aren’t massively expensive by any stretch of the imagination, but the more sophisticated technology contained inside them means that they’re inevitably more costly than their wired counterparts. For some people this could be the deal breaker, especially if they need more than one handset. 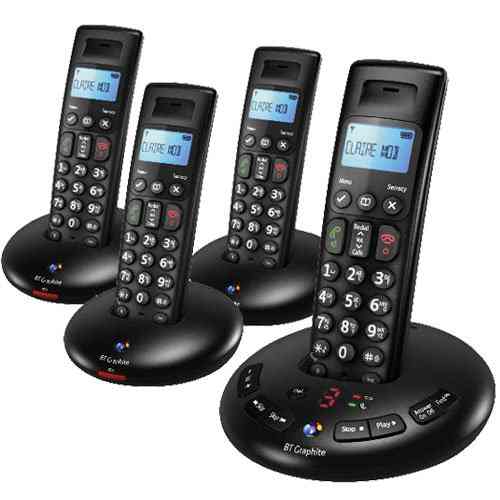 Less efficient: Generally cordless telephones aren’t quite as energy efficient as wired telephones – you could probably guess that from the fact that you need to plug in a cordless telephone base into a power socket. You won’t see a sharp rise in your electricity bills, but if you’re a particularly green individual this could be something to deter you from going cordless.

Less reliable: This one depends on the frequency of your cordless telephone. Some cordless telephones are set at the same frequency as things such as car alarms and baby monitors, which can cause interference – the last thing you want when you’re in the middle of an important telephone call. Some people also claim the sound quality just isn’t as good.

Easier to misplace: You always know where your wired telephone is – it can’t go anywhere. However, your cordless telephone can end up pretty much anywhere. If you’ve left it upstairs you might find yourself in a mad dash to answer it while preparing your dinner.

Cordless telephones usually have a button on their base you can press, which will make the handset ring allowing you to find it. However, if the handset runs out of power the feature is rendered useless.

Despite the fact that cons have outnumbered pros, many people find that the main pro (freedom) pretty much outweighs everything else, at least in a home setting. Advances in technology have come so far that things such as cost, efficiency and reliability are much smaller issues than they have been before. So maybe it’s time to walk and talk?

One thought on “The Pros and Cons of Cordless Telephones”