Apple iPhone 5, just these three words alone have had consumers on the edge of their seats, is this going to be the name, is this really going to be released this week, and what will it look like are all questions that have not been answered yet and of course will not be until the official announcement in September. Sit back for a little while and read the rest of this article, because there is a new iPhone 5 parts compared to 4S video revelation about to hit your screen as soon as you left click that play button.

Component leaks for the iPhone 5 are coming in left, right and centre at the moment and we would like to share with you a little video clip comparing parts of the new iPhone and the iPhone 4S. This video shows you a real close up of the iPhone 5’s dock connector and front panel, as well as a few other parts.

In the video that MacRumors have shared by way of SmartPhone Medic is intriguing to say the least, nothing new here but it does show all the parts put together. The screen size is very different to the iPhone 4S, yes it looks much bigger, and you will also notice that the camera has moved from the left of the ear speaker to the top middle of the speaker.

We will not give you all the differences between the two phones as that will spoil the video, please watch it below and then do comment here. Not sure if this is indeed real or fake, but it looks promising, we will leave that up to you to decide. 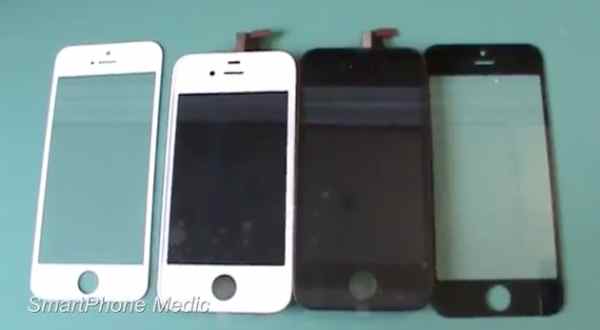 Whilst on the subject of the iPhone 5, we would like to inform you that Reuters has been notified that the front panel on the new Apple smartphone is 30 percent bigger than current iPhones and will be 4 inches corner to corner, which means it will not be as big as the Samsung Galaxy S3.

Reuters also reports that LG has started to mass produce a new line of thinner, smartphone display panels aka in-cell panels, it is believed that Apple will house these in there new handset. The specs for these panels are apparently going to feature the same resolution of 1136 x 640 and a PPI (pixels per inch) of 326, which means they will have the same PPI and width as the iPhone 4S.

Roll on September 12th in the meantime please watch the video below.