Yesterday we heard that LG had gone official with the new LG Optimus G in South Korea, and today the company has followed up that official announcement by introducing yet another Optimus smartphone, this time in the form of the LG Optimus L9, a budget to mid-range Android ICS handset, and we have a few details on the device for your consideration.

According to an article over on Slash Gear, the LG Optimus L9 sports a 4.7-inch IPS touch screen, although there’s no mention of screen resolution, along with a 5 megapixel rear facing camera, a VGA front facing camera, 1GB RAM, and a 1GHz dual core processor.

The Android Ice Cream Sandwich running handset measures 131.9 x 68.2 x 9.1mm with a casing that has a few metallic highlights and weighs in at 125 grams, has 4GB on board storage, and a 2510mAh battery that uses LG’s SiO+ tech, and the company says keeps the device running ‘all day long.’ 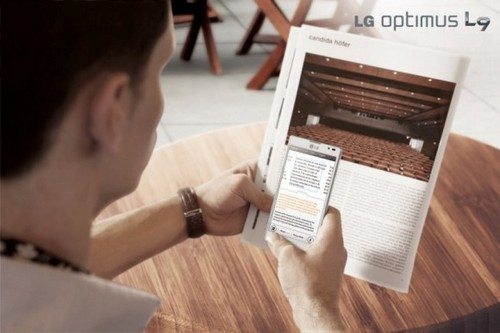 The LG Optimus L9 features an virtual keyboard that can apparently be chanced to suit either left handed users or right handed users, QTranslator that uses OCR with online translation tools or a local dictionary to translate foreign language text in real time, and QMemoTM for taking notes, and has handwriting support although there is no stylus with the device.

Obviously as LG has only just introduced the Optimus L9 the company hasn’t made any mention on when the mobile space is likely to see the Android handset come out to play, and also there’s no word on just how much the handset will hit the pocket for, but as soon as we hear, we will of course pass it along.

One thought on “Android ICS Optimus L9 introduced by LG”