No doubt all the iOS faithful are eagerly awaiting for Apple to unveil their latest iOS smartphone, currently being referred to as the iPhone 5 or new iPhone, and expecting Apple to deliver the goods on the handset on September the 12th, with a rumoured release by the 21st of this month, and of course the iPhone 5 is expected to arrive sporting iOS 6.

Over the past several months there has been quite a bit of speculation along with alleged images of parts and such of the device surfacing in the build up to that much anticipated iPhone 5 announcement, although one does have to remember, everything the mobile space has heard thus far about the iPhone 5 is still only a rumour.

It appears that one of the biggest wants with the iPhone 5 is a new design, especially when Apple delivered the iPhone 4S that basically looked just the same as the iPhone 4, and some of my iPhone 4S toting friends have said to me that they hope the next iPhone looks different to the current model.

However, it seems that although the general consensus is the iPhone 5 will come with a bigger display, when it actually comes to looking different to the current iPhone 4S, outwardly there isn’t that much difference if you go by a recent video posted by the guys over at The Verge, which compares the iPhone 4S with an iPhone 5 mockup that has been based on the abundance of rumours, and comes from an unnamed case manufacturer, you can check that footage below. 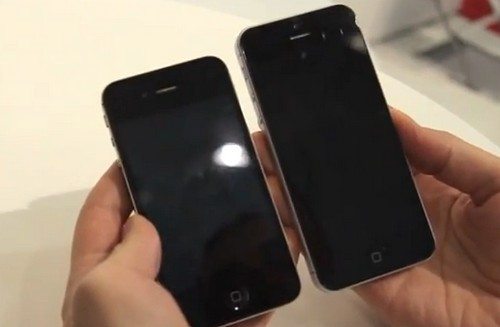 Will the iPhone 5 be Apple’s first LTE enabled smartphone? Some past rumours have said that the next iPhone would bring Apple in line with Android and other devices by delivering LTE functionality, but there is also some question over that as well, because there is word that if Apple does deliver a 4G LTE packing iPhone, there might be some legal action taken by Samsung, so that might have some baring on whether the iPhone 5 will be 4G LTE enabled or not, we’ll have to wait and see.

Another area where Apple has been lagging behind is of course NFC functionality, and it was originally rumoured that the iPhone 5 would finally be the device that brings NFC functionality to the iOS faithful. However we recently reported that it looks like this will not be the case, and the iPhone 5 will not come with NFC, although as with everything Apple, nothing is certain until Apple says so.

As for iOS 6, well the new operating system is expected to bring a few new things to users, such as Apple Maps rather than having to use Google Maps, which is said to offer smoother zooming with labels and details, whilst there’s also a rumour that iOS 6 will feature hologram technology, so perhaps the iPhone 5 will come with 3D. Then there is a rumour iOS 6 will enable FaceTime over a cellular network.

Obviously all the above remains firmly in the rumour arena for now because no one really knows what the iPhone 5 will look like, but the main points that everyone seems to be expecting is an iPhone 5 with a bigger display, whilst being slimmer, a quad core processor, in-cell touch panel for a thinner device and improved camera.

However, I do have to say that if you check out the video below, and the iPhone 5 does indeed turn out to look like the iPhone 5 in the footage, it seems to me that design wise, there isn’t that much difference between the new iPhone and the current iPhone.