Well now, we all know Microsoft has entered the tablet space with the Surface tablet, but it appears that Microsoft also wants a piece of the smartphone market apparently with the possibility of new Microsoft Surface smartphone coming out to play in the mobile space that might sport the company’s latest mobile operating system.

According to an article over on Redmond Pie, German site Wparea.de is reporting that a Windows Phone benchmarking app called WP Bench, has revealed the Microsoft Surface phone, which runs OS 8.0.9754.0, which is consistent with previous sightings of the Windows Phone 8 operating system.

Naturally the above can’t be regarded as concrete evidence that Microsoft is indeed planning on delivering a Microsoft Surface smartphone, and this is the first time we have heard of the device, but then there’s a first time for everything isn’t there, so perhaps this is only the beginning and more will be revealed later. 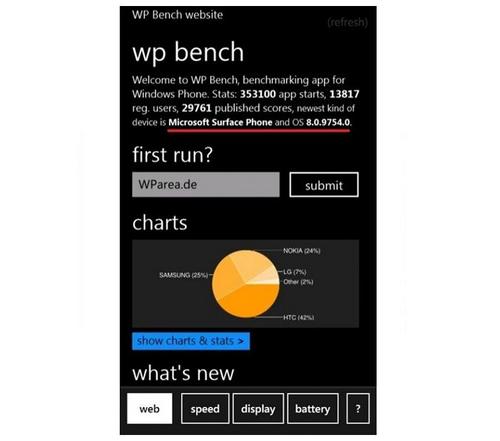 If Microsoft is actually contemplating putting out their own Windows Phone 8 smartphone, it could possibly upset Nokia slightly considering they have thrown all their eggs into the Windows Phone basket as it were, and obviously other big names such as Samsung, LG and HTC probably wouldn’t be too pleased either.

Still no doubt if Microsoft is actually planning on delivering a Microsoft Surface phone at some point in the future, more about the handset will obviously leak to the mobile space over time, as it is quite difficult to keep such things under total wraps without something leaking out.

So what do our readers think about all this, do you think Microsoft should deliver their own Surface smartphone, or do you feel they should leave the smartphone space to Nokia and other partners?