As we reported yesterday, Amazon has now delivered the info on the new Amazon Kindle Fire HD tablet, which will be available in both 7-inch and 8.9-inch flavours, with the 7-inch Kindle Fire HD releasing in the US on the 14th of this month, while the 8.9-inch model comes on November the 20th. But what about over here in the United Kingdom and the rest of Europe?

Well according to a report over at Slash Gear, Amazon has now confirmed that both the Amazon Kindle Fire, and Amazon Kindle Fire HD will be released in the United Kingdom and across Europe on the 25th of October, and this will be the first time Amazon’s Android slates have launched outside the United States. 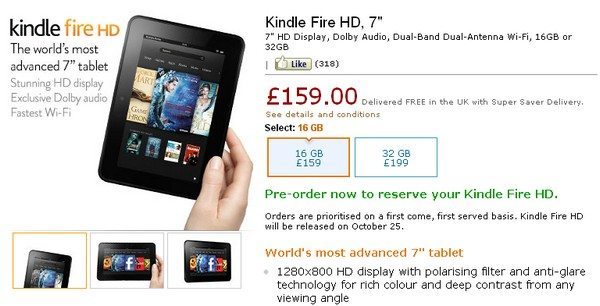 Currently the 7-inch Google Nexus 7 tablet goes for Â£159 in the United Kingdom, which means that Amazon is offering a larger tablet for the same price or a similar sized tablet for roughly 20 percent less.

Will any of our UK or European readers be grabbing the Kindle Fire or Kindle Fire HD as of the 25th of Oct?