If you are one of the iPhone faithful out there, you no doubt have to carry a separate charging cable in order to juice up your iOS smartphone when your juice runs low,but would it be easier if you didn’t have to carry that extra charging cable all the time? Well there’s a new iPhone case project running over at Kickstarter that if it gets off the ground just might do away with that cable you have to carry.

The Kickstarter project is called CASE: Lynk, and is a slim design case for the iPhone 4S and apparently the iPhone 5, that sports an integrated charging and syncing cord whilst not making the iPhone case bulky. The guys developed a custom USB connector that allows the thickness of the back of the case to be slimmed down to 2.3mm, whilst the rest of the case is just 1mm thick.

With the CASE:Lynk the iOS smartphone user will never be without their charging and syncing cable again as the USB connector can plug into anywhere including desktops, game consoles, laptops, and even car stereos, and apparently they also have that smaller dock connector on the iPhone 5 covered. 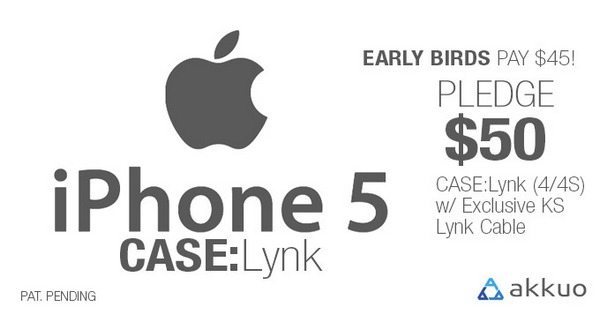 Of course we have a couple of videos for our readers viewing consideration below so that they can find out all about the CASE:Lynk for iPhone, so don’t forget to head on down and mash those play buttons to check out the footage.

And of course if you feel that the CASE:Lync is something you consider worth backing you can always make a pledge by heading over to Kickstarter. This Kickstarter project is looking for a funding goal of $125,000 to get up and running, and has currently garnered $2,363 in pledges with 30 days to run, so if the CASE:Lynk captures your attention then think about making a pledge.