The Apple iPhone 5 was only released on Friday and headlines were full of news of the launch and the huge numbers that were being sold. Many people are extremely pleased with their shiny new iPhones but as usual with any major product launch, a few days later some issues usually start coming to light. With the iPhone 5 there seem to be some concerns over poor build quality. Meet ‘Scuffgate’ or even ‘Scratchgate’ as the problem is already being referred to.

On release day we posted an article about the first drop and durability tests on the iPhone 5 where it actually turned out to be much tougher than it looks. However in the same post we told about a report saying that the black iPhone 5 in particular seemed to be susceptible to scratches and scuffs after an image was posted by a website that had deliberately attempted to damage the anodized aluminum reverse of the iPhone 5. At the time we commented that although this did not look good for the new iPhone we imagined that if anybody was determined enough to mutilate a product they would be able to do so eventually.

However it seems now that we may have to take back our initial thoughts on this, as it seems to be becoming a widespread issue and a real concern for iPhone 5 customers. These customers have not attempted to deliberately scratch or scuff their new phones either, but rather it seems as though many actually received them marked, straight out of the box! GSM Arena reports that plenty of new iPhone owners are claiming that their new black and slate colored iPhone had scratches and also dents along the edges when they took it out of the box.

It has always been the case that anodized aluminum is pretty easy to scuff as the color is painted on top. Therefore a tiny scuff can reveal the silver color underneath. Thin edges in particular will also be susceptible to denting, as aluminum is such a soft metal. The problem is when the product is already damaged before the new owner has even had their hands on it as seems to be the case, with growing numbers of users reporting this problem. It seems that owners of the white and silver iPhone 5 are also noticing this issue but that maybe the marks aren’t quite so noticeable with this color option. 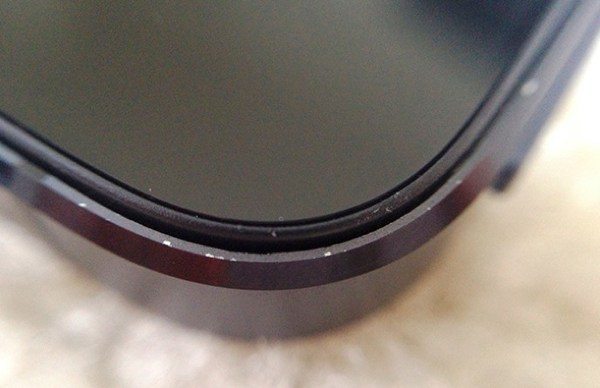 This does suggest that Apple has pretty poor quality control checks in place at the moment and while it should be easy enough to get a replacement for any defective or damaged iPhone 5 received, it shouldn’t be the case that consumers have to sort this problem out in the first place. Another issue lies with those who intend to import the device to another country and this is where a statement from Apple would be welcomed. Although Apple has already issued a statement regarding criticism about its new iOS 6 Maps app, the company has yet to comment on the build quality concerns as far as we know.

Forbes also reports on this problem and says that users say the damage was underneath the protective film used for packaging, suggesting the marks didn’t arise in transit but rather through carelessness on the factory floor or through a faulty production process. Other new iPhone 5 users also report that although their new phone was fine out of the box, it then picked up scuffs and scratches to the back and sides after only very light use.

Another report, this time on AllThingsD tells how complaints are growing about this issue and you can see evidence of this at this MacForums link and also on this Apple customer support thread. One iPhone 5 user states that a customer service rep informed them that this was a “widespread issue” so it seems that a rep has acknowledged it, even if a wider company statement hasn’t yet been issued.

Whereas once we had Antennagate the big issue for this iPhone 5 now appears to be Scuffgate or Scratchgate then. We’d really like to hear from our readers who already have the new iPhone. Is your phone fault-free or did you notice any damage on your iPhone 5 on unpacking it? Maybe it was fine at that point but has since received some damage after only light use? Let us know with your comments.