Today we have news for you of a really interesting insight about Android and iPhone apps that comes from a tech enthusiast and Android user. Despite the fact that Android smartphones have a bigger share of the market, with recent statistics showing Android at 52.2% and Apple’s iOS at 33.4%, this particular Android device owner is honest enough to say that he prefers iPhone apps. Taking in mind the usual Android vs. iOS debate and the fierce loyalty it evokes in many people, that’s quite an admission.

Sascha Segan is a well-known and respected tech writer for PCMag and points out that while he normally uses an Android device he also tests the iPhone and iPad for parts of the year. This very much comes from someone in the know then, which makes it all the more intriguing as Android-loving Segan concedes that he favors iOS apps, particularly gaming apps. He feels that developers also prefer iOS because there’s less fragmentation, more developers receiving payment for their work and not as much piracy and that this all makes iOS efforts easier.

This leads, he feels, to the top third party iOS apps being of better quality and abundance than Android apps despite the extreme competition of one platform over another to be the best. We recently gave details of a market share survey that revealed the figures above, and it was evident that both platforms are still increasing their share of the market despite competition from Microsoft’s Windows Phone OS, RIM’s BlackBerry OS and Symbian. In fact those three platforms only achieved less than 14% of the market when added together.

Android still has a big lead over iOS though. However we should remember that Apple’s iPhone iterations are the only smartphones using iOS while many manufacturers make a plentiful variety of Android phones. Still, as Google’s Android is so far ahead you might imagine its apps might also be leading from the front. Segan goes into some detail about exactly why he feels Apple’s apps are preferable and firstly considers the App Store to be easier to browse and search than the Google Play Store. 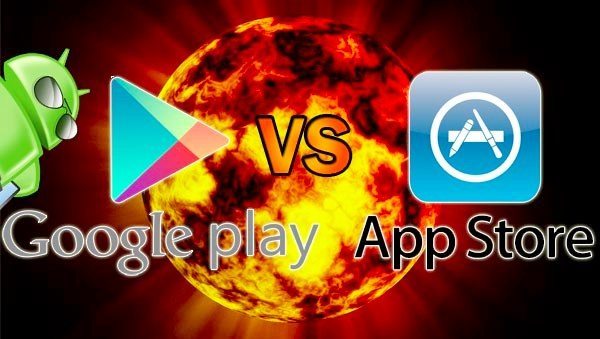 He also takes into account that many of the leading developing teams have come up with a considerable amount more apps for iOS than for Android. For instance EA Sports has 106 iOS apps compared to only 27 Android ones while Gameloft sports 161 apps for the iPhone but only 48 Android apps. Another thing to consider is, as we’ve seen examples of time and time again, that many popular gaming apps in particular only reach the Android platform, some months or even years after they become available on iOS. As we reported at the time, Temple Run is a classic example of this and we had many readers commenting on its absence on Android for so long.

As well as all this Segan also feels that many iOS apps simply look better than their Android alternatives and points to the CNN app as an instance of this. He regards the Android version as perfectly acceptable but notes the bigger images, nicer background and time stamps of the iOS app as proving this point. What’s more Segan wonders if Android apps can ever be improved enough to equal those on iOS, particularly when thinking about the amount of Android fragmentation with a huge amount of different devices and variants and the fact that Android apps have to be tested for more than 50 versions of codes to suit differing screen sizes and processors. By contrast developers creating apps for iOS can concentrate purely on factors such as “fit and finish.”

We should remember that although Segan concludes he is envious of iOS apps he is not condemning all Android apps, indeed noting there are many very good ones that he enjoys using. It’s just that attempting to look from a completely unbiased view he feels that iOS apps have the edge. This is sure to provoke strong feelings amongst Android and iOS devotees and we’d really like to hear your views on Segan’s insight into the world of apps.

Are you an avid Android fan who secretly admires the choice and quality of iOS apps or maybe you don’t agree with Segan at all and are perfectly happy with the Android apps available? Perhaps you’re an iPhone user and some of that choice is to do with the quality of the iOS platform and its apps? We’re intrigued to hear from readers on this so let us have all your comments.