Apple stores not the biggest seller of the iPhone in US

Obviously Apple stores see a vast amount of visitors when compared to other retailers, but there are only 250 Apple stores in the US whilst Best Buy have 1300, and AT&T, Verizon and Sprint have in excess of 5000 carrier stores, which means Apple store sales are a fraction says a report over on Phone Arena.

Thus it appears that the majority of iPhone handsets are sold directly from carrier stores, according to a recent study that took in 1227 US customers that purchased either a iPhone, Mac or Apple iPad between December of 2011 and August this year, which showed that although when it comes to the iPad and Macs, Apple stores sell the most, when it comes to the iOS smartphone, retail partners sell the most. 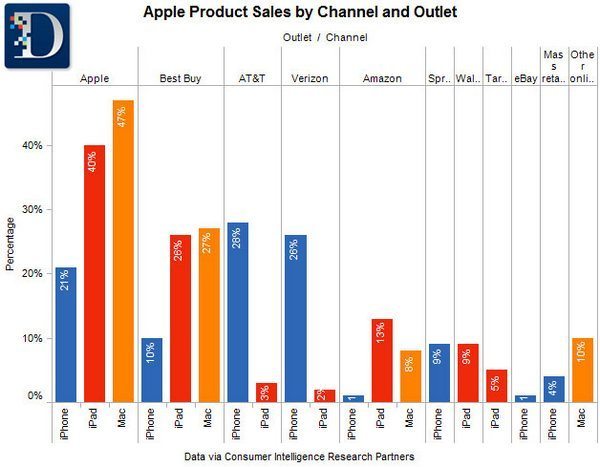 According to the survey, AT&T outlets sell the most iPhones with 28 percent, followed by the Big Red with 26 percent, and Apple coming in third with 21 percent, whilst Best Buy gets 10 percent, Sprint with 9 percent and mass retail has 4 percent.

Although Apple stores do shift 47 percent of all Macs, and quite an impressive 40 percent of the Apple iPad in the United States with both devices sold without a data plan.

So we’d like to ask our US readers out there where they purchased their iPhone, was it direct from an Apple store, or did you opt to buy the device straight from a carrier? Feel free to let us know by dropping us a line to our comments area below.