Rumors of a smaller Apple iPad dubbed the iPad mini have been surfacing for many months now but over the last week or so things have really begun to warm up. It’s speculated that we may see an unveiling of the iPad mini at an Apple event soon and today we have heard claims that the iPad mini has gone into mass production and also some accessories have been spotted in the form of cases for the iPad mini. All is looking promising then for an imminent release.

We told how invitations for an Apple event are expected to be sent out from October 10 with the big hurrah planned for October 17. While it hasn’t been confirmed that this is for the iPad mini’s first official appearance it’s certainly widely expected and there are rumblings of a possible release by the end of October. This new iPad mini is rumored to have a 7.85-inch display as opposed to the 9.7-inches of the latest iPad and it will supposedly be at a lower resolution.

The WSJ tells of reports from executives at a component maker saying that a smaller iPad than the current one has now gone into mass production. Two sources said that the LCD displays were in production at LG Display Co., and AU Optronics Corp., and also reiterated the above information about screen size and a lower resolution. It’s expected that the iPad mini will be a cheaper alternative to the standard version and although 60% of the global tablet market is held by the iPad there’s obviously a place in the market for a smaller version, as seen with the popularity of Amazon’s Kindle Fire or the Google Nexus 7. 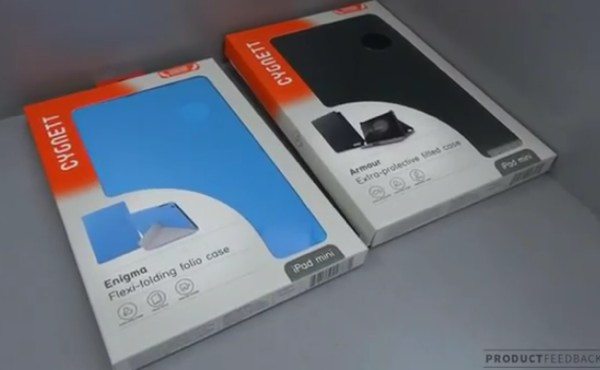 More iPad mini news comes from Apple Insider, which reports on iPad mini cases being spotted in Australia and if this is correct it’s an extra sign that the iPad mini release is close. Apparently a tech blog in the country managed to buy two cases for the iPad mini from an undisclosed retailer. The cases appear to have been made by Cygnett who are a bona fide accessory maker as you can see from our report on iPhone 5 cases here. Product Feedback, the blog concerned, has also posted a video on YouTube that you can see below this story, which shows these purported cases.

As you can see from the video the cases look authentic enough and come with printed packaging and instructions. The two cases are dubbed the “Flexi-folding folio case” and the “Extra protective fitted case” and the packaging clearly shows that they are for the iPad mini. The site also gives the measurement of the cases as 20cm x 13cm x 1cm and the diagonal measurement of 23cm (9 inches) fits the rumors of a 7.85-inch display. Although these cases appear to be the genuine article it’s impossible to tell at this stage and there’s always the possibility that they may have been designed from leaked but not confirmed specs in order to be one step ahead of other accessory manufacturers.

However, all the signs are now looking promising for an iPad mini release soon and we wouldn’t be surprised if indeed it does hit shelves by the end of October, in time for the holiday season. Of course we shall bring you further developments as we hear them. Are you interested in the iPad mini? What sort of price would you be prepared to pay for a smaller iPad with lower resolution display? Send your comments to let us know