If you are over in the good old US of A and your preferred carrier is T-Mobile, and you have been patiently waiting for the popular Samsung Galaxy Note 2 to hit the carrier, you might like to know that you shouldn’t have that much longer the wait, as the popular Android smartphone/tablet combo should become available soon.

For those that are waiting for the Samsung Galaxy Note 2 to hit T-Mobile, the carrier has now listed the device as coming soon and will be available in both Titanium Grey, and Marble White versions, although just how much the Galaxy Note 2 will cost with T-Mobile isn’t clear as the carrier hasn’t yet listed any pricing.

Along with listing the Samsung Galaxy Note 2, T-Mobile has also listed the LG Optimus L9 as coming soon as well, again without revealing any pricing for the Android Ice Cream Sandwich smartphone. 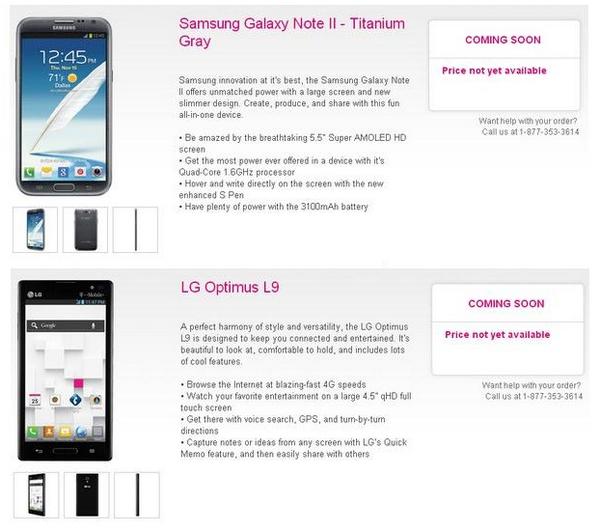 As stated above, there is currently no pricing available for the T-Mobile versions of both Android smartphones, and no word on just when T-Mobile will make them available for purchase, but at least we now know they are coming to the carrier soon.

Any of our readers going to be grabbing the Note 2 or Optimus L9 from T-Mobile?