The Apple product trend, the power of buying

iPhone maker Apple obviously has a lot of fans for its various products that are available, but there are also a high number of consumers who wouldn’t dream of buying an Apple product with the high price often given as a reason, but Apple has a good product trend with the power of consumers always looking to buying the devices on offer from the company.

A survey has recently been conducted by ask your target market, in an effort to find out about subjective feelings and opinions about the products from Apple, and asked a collection of people a number of questions.

First they were asked if they had ever actually owned an Apple device such as an iPhone, iPod, or computer, which saw 52.1 percent saying yes and 47.9 percent saying no. This could possibly mean that almost 48 percent of the US consumers asked the question are not too fussed about owning an Apple product, or can’t afford them.

They were also asked if they currently own an Apple product and out of 1042 respondents 88 percent said yes with 11.9 percent saying no. When it comes to the devices that are actually owned the big majority have the iPod at 71.1 percent, while the iPhone achieved 36.4 percent. 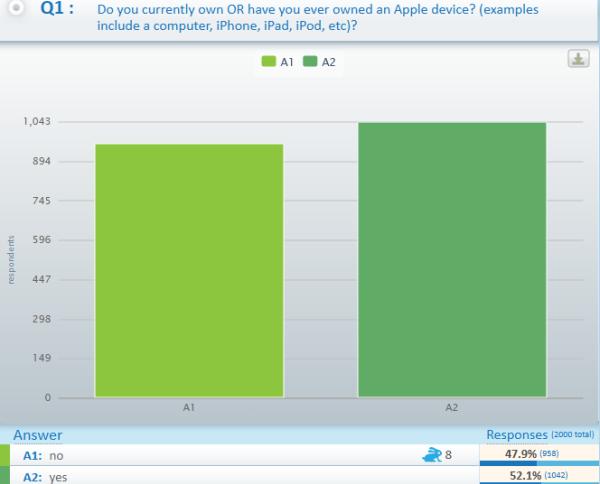 This was followed by the iPad on 27.1 percent and the MacBook Air or Pro with 14.4 percent, and bringing up the rear was the Apple TV and Mac Mini on 3.4 percent. Those that actually own an Apple device 45.8 percent were very satisfied with their purchase, which compares at the other end of the scale with 1.4 percent not satisfied at all.

There were many Apple owners that wished they had the iPad with 30.9 percent wanting one, while 21.3 percent dreamed of owning the iPhone. A massive 75.6 percent of those questioned said that Apple would have to lower their prices to get their business, with 19.3 percent saying that there is nothing that the company could do to make them buy their products.

There were many that thought that Apple’s marketing was either creative or effective, but a big majority of those questioned believed that Apple’s products were overpriced, with 36.7 agreeing and 20.8 percent strongly agreeing. Check the link out above to see the full survey results.

Are you a fan of Apple products?

2 thoughts on “The Apple product trend, the power of buying”