Yes more about the event that Apple will be holding later today when they unveil the Apple iPad mini, and no doubt many of the iOS faithful will be hitting up numerous blog and tech sites to find out all they can on the smaller iOS tablet as soon as it becomes available, but it appears that as long as you have Apple TV you can live stream the iPad mini event.

According to a report over on iDownload Blog by way of 9to5 Mac, apparently some users have noticed there is a new icon in the main Apple TV menu, which matches Apple’s press invites and the description states there will be a live feed of the special event held today at 10AM, that time depends on just whereabouts you are on the globe of course.

During the Apple event is is expected that the company will dish the dirt on the new smaller iOS slate along with unveiling new Macs and possibly as rumour has it, a refreshed model of the new iPad, and word of possibly a new version of iBooks. 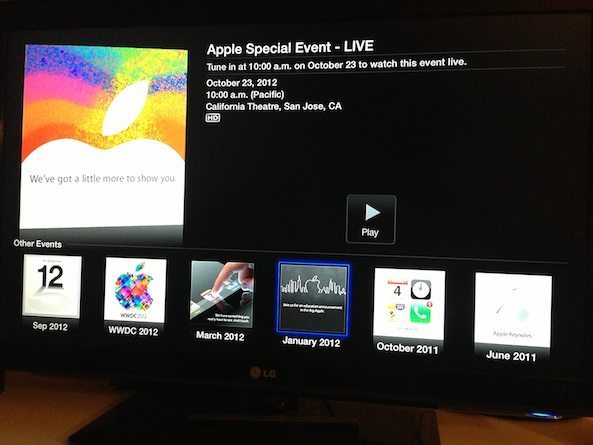 Whatever Apple unveils everything will be revealed to the mobile space and no doubt the tech and bold site will be inundated with all the relevant info you can get your Apple fix via, but at least you now know, if you own an Apple TV you should be able to watch the event as it starts live.

It is unknown if Apple also intends on live streaming the iPad mini event via their website at this time, and of course we here at Phones Review will bring our readers everything we can about the Apple iPad mini unveiling as soon as we get to know, so feel free to hit us up later to catch the latest iPad mini news.