It appears that back in August Research In Motion applied for Bluetooth certification for a device labelled RFH121LW, and running OS 10.0.9.341, a BlackBerry 10 device, and apparently on the 19th of this month that BlackBerry 10 handset became Bluetooth 4.0 certified.

The news of a BlackBerry 10 device gaining Bluetooth 4.0 certification was unearth by Crackberry, who say it is now known that Research In Motion updated BlackBerry 10, as the BlackBerry 10 Dev Alpha handsets are running OS 10.0.9.388 or above, and as such it isn’t clear what device this might be albeit running BlackBerry 10, is a smartphoen and has been certified for Bluetooth 4.0.

In other related news RIM has been improving on several things that the previous BlackBerry operating system had limitations with, and one such improvement is how BlackBerry 10 handles system dialogues and notifications, and have give them a revamp using French toast and Cinnamon toast.

Although not new, ‘toasts’ are used by some developers in their BlackBerry OS 6 and BlackBerry OS 7 apps; however with BlackBerry 10 toasts become part of the core operating system by adding to the overall style of BlackBerry 10 and opening up several new functions. 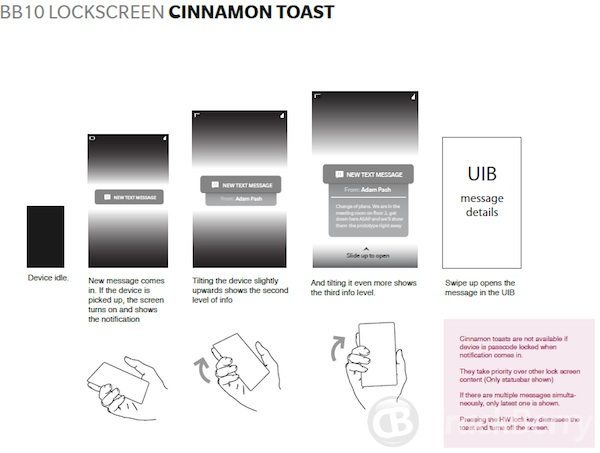 According to an explanation by N4BB, as a notification comes in the user of a BlackBerry 10 handset can tilt the device to see more information, and tilt again to see another line and so on until everything is displayed, and apparently the actions are reversible, meaning if you pick up your handset and look at the information, and then place the handset down, the information will be covered back up in real time. 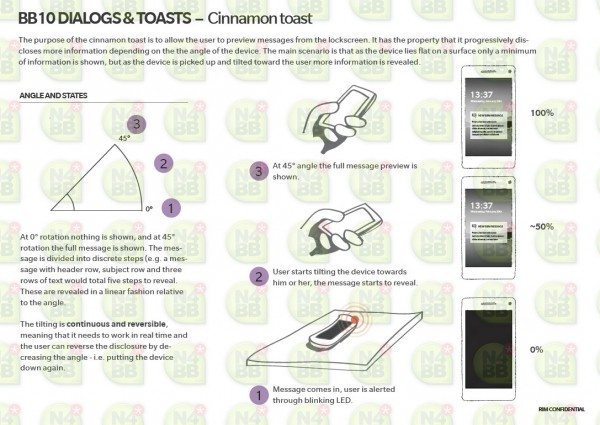 The other portion of BlackBerry 10 toasts is to do with system dialogues, something BlackBerry 10 Dev Alpha owners are familiar with and is highlighted throughout the BlackBerry 10 systems dialogues docs., and even provides code just in case you wish to make your own.

Apparently French toast addresses the placement, length of time French toast should show, whilst highlighting the deletion of items as a use case scenario, so when you clear browser history a toast instantly appears showing two things, one the history was cleared and second the user can undo the action if required.

The guys say that over all these things could be considered small things, but are nice additions, and show that RIM is paying attention to the smaller details in BlackBerry 10.