A brand new iOS smartphone app is gathering a huge amount of publicity at the moment and is very much in the limelight. The Summly app was created by British teenager Nick D’Aloisio and is a news story summary resource. It has attracted investment from high-profile investors but sadly it could fail its moment in the limelight because of various problems as multiple users are reporting issues with the app.

The idea of Summly is to give users the latest news in bite-size chunks and it has already soared in popularity, hitting number 9 in the US Apple App Store only two hours after its release. 17-year-old Nick D’Aloisio took time off school to work on his app project and prominent people such as Stephen Fry, Rupert Murdoch and Tech City CEO Joanna Shields have all supported the creation of the app, which brings users existing news in summary form. D’Aloisio explained that the app uses algorithms to develop the news stories into summaries that users can scan through or swipe if they want to read the original story in full.

D’Aloisio has big visions for the free app, stressing that people today are more interested in the news as “snack-sized information” according to BBC News and the idea behind Summly certainly seems impressive, especially coming from someone who only became 17 last week. D’Aloisio says that he wants to complete his education and plans to go to university but also wants to remain involved in the company. The app is gathering a massive amount of attention but not all of it is positive and there have been reports of problems using the app and criticism of the app’s navigation. However this hasn’t stopped it receiving a user rating of 4/5 stars in the App store.

You can find the free Summly app at iTunes here and it’s compatible with iPhone 3GS, iPhone 4, iPhone 4S, iPhone 5, iPod touch (3rd, 4th and 5th generation) and iPad running iOS 5.0 or later. Touted as “Pocket Sized News for iPhone” it aims to make it easy to browse online news content. Features include 400 character summaries, the ability to customize the app to suit your main interests, summaries of hundreds of news sources from around the world and the ability to share summ.ly links with friends. Just some of the words used to describe the app on customer reviews of the app though include “confusing,” “fail,” and “nonsense navigation.” 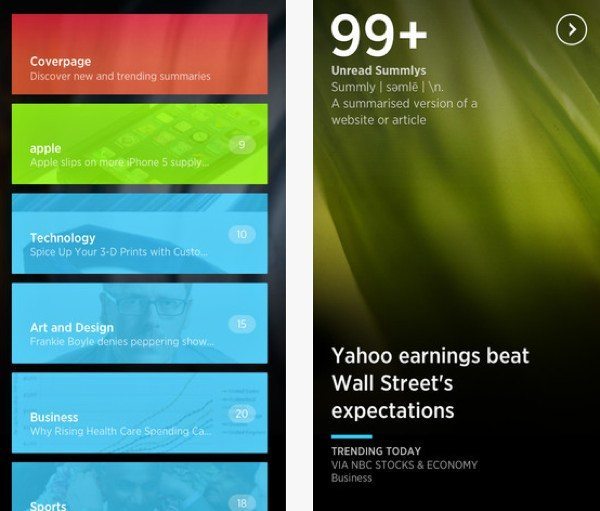 We tried to download the app yesterday and were greeted over and over again with the message “Fetching articles.” This continued for hours on end but by today the app was working okay. We’ve also been receiving comments from some of our readers about Summly and some have been very vocal about what they think of it. Along with criticism about the navigation there are also questions about how Summly is able to simply republish content as summaries and the legalities involved in these sort of copyright issues.

We’re no experts on this subject but it does seem to us that this could be a little dodgy to say the least, although D’Aloisio has said that there could be possibilities for micro-payments in the future if people want to view the original story in full. Other comments we’ve received from readers also tell about the unceasing “Fetching articles” message that we experienced yesterday with some readers being informed eventually that their device was offline when in fact it was clearly connected.

While we admire the innovation and creativity of Nick D’Aloisio it does appear that Summly requires some further work, and quickly, to make it easier to navigate and browse news content. It will certainly be interesting to see if there are any issues raised from the content of the site, how Summly progresses over the next few months and if it will fulfill its potential.

We’d really like to hear your views on Summly. Did you have any problems getting Summly up and running? Maybe you find the app a little bewildering to navigate? Alternatively you may have found Summly a joy to use? Send us your comments to let us know.

4 thoughts on “Summly app may fail the news limelight”