It seems that we are now seeing more smartphones than ever being released to the masses with a whole host of new products on various platforms being made available. Away from the likes of Apple and Samsung we are also seeing handsets become available on the new Microsoft Windows Phone 8 platform, and for Verizon customers they now have a buying preference between the Nokia Lumia 822 and HTC 8X.

Both of the new Windows Phone 8 handsets are now available from the carrier and the Nokia Lumia 822 is the cheaper of the two smartphones. The device is currently available for $99.99 after an online discount of $50 on condition of a new two year contract being agreed, and is basically Verizon’s version of the Nokia Lumia 820 and exclusive to the carrier.

For your money you get a handset with a 4.3-inch WVGA display with 480 x 800 resolution, and the back cover is replaceable allowing you to add the wireless charging feature. This is powered by a dual core Qualcomm Snapdragon S4 1.5GHz processor coupled with 1GB of RAM, and on board storage comes in at 16GB with the option of expanding further via microSD card.

There is also an eight megapixel rear camera on the back with Carl Zeiss technology and a 1.2 megapixel front facing shooter. The HTC 8X meanwhile is the more expensive handset of the two priced at $199.99 with a two year contract, and this higher price is reflected in the specifications of the handsets display. 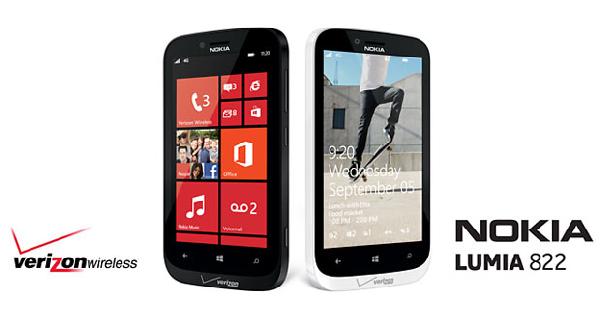 The smartphone sports a 4.3 inch S-LCD 2 display with a resolution of 1280 x 720 that is powered by the same Qualcomm Snapdragon S4 1.5GHz processor again coupled with 1GB of RAM. Storage wise there is 16GB built in without the option of further expansion. Camera wise there is an eight megapixel unit on the back, and around a front you will find a 2.1 megapixel shooter.

Both the HTC 8X and Nokia Lumia 822 are available now via the carrier via these links, but which of the two handsets will you be buying?