The hugely popular Google Nexus 4 released in November through the Google Play Store but sold out virtually instantly, leaving many customers without the option to even order one for a later shipping date. Supplies since have been sporadic and those who’ve managed to order one are seeing long shipping dates. Because of this we now wonder whether the continuing lack of stock of the Nexus 4 will induce some potential owners to now consider an alternative choice.

Let’s be clear from the start. When we say ‘Nexus 4 failure’ in our title we are not referring to the actual smartphone itself but instead to the complete failure from Google and LG to come up with anywhere near enough stock to supply demand. We’ve documented how hard it has been for consumers to get hold of the Nexus 4 on many occasions now so won’t go over old ground again although if you want a little background and news on stock availability checkers you can see one of our previous articles here. As for the phone itself we’ve discussed its many merits and concluded it was a hugely impressive handset with a lot to offer many smartphone users, all at an incredibly competitive price.

Nevertheless it almost doesn’t matter how notable this Android phone is or how much enthusiasm there is for it, if customers simply can’t get their hands on it and we’ve had plenty of emails and comments from readers about this to our previous posts. Although many insist they will wait for the Nexus 4 as long as it takes, others say that because of the time it’s taking to get one they are now deliberating about alternative smartphones instead. As more and more time goes by we have noted less people saying they will hold on for the Nexus 4 and more who have lost patience with waiting, which is a real shame for Google and LG who have failed to capitalize on prospective sales. 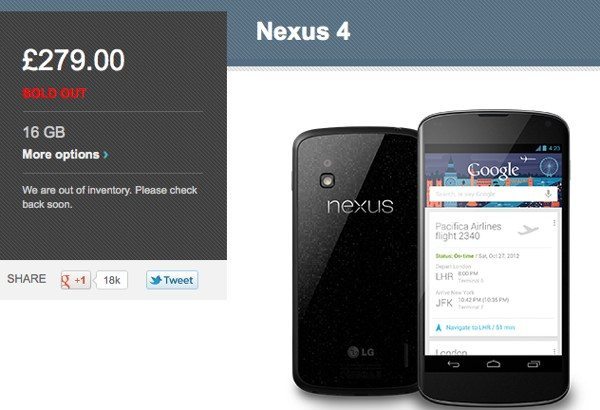 A look at the Google Play Store today reveals just as we expected, that the 8GB and 16GB Nexus 4 are both still sold out, with no option to order one and there is still no official news on when the phone might come back into stock. This is one of the most annoying factors for many who are waiting, as if there was a concrete or even an approximate date for availability they would be able to make an informed decision on whether they should continue to wait or not. Google and LG may well think that by not giving any timeframe, if stock is still some time away, that consumers will still wait and hope it’s coming soon. However this approach from Google and LG could backfire as without any availability date at all, some customers might assume it’s going to take longer to come back into stock than they originally thought and no doubt some of those have already chosen an alternative rather than wait any longer.

Of course with CES 2013 taking place this week many new phones have been announced that will shortly be coming to the market such as the Sony Xperia Z. Other upcoming Android phones include notable handsets such as the HTC Butterfly and HTC M7 and of course the Samsung Galaxy S4 is also likely to appear in the coming months. Those who are not steadfast Android fans might even consider the upcoming BlackBerry devices that are on the way and will be running the completely overhauled Blackberry OS, BlackBerry 10.

The longer it takes for supplies of the Nexus 4 to come to fruition, the more appealing these other phones will become, even to those who may once have been firmly committed to getting a Nexus 4. We’d like to hear from readers about this and invite you to share your thoughts. Are you still waiting for the Nexus 4 to come back into stock? Will you loyally continue to wait even without any availability date being given by Google or LG? Maybe you originally planned to wait but have now decided to opt for another smartphone, or at least consider a different purchase? Let us know by sending your comments.