It’s fair to say that a lot of attention has turned towards the next Samsung Galaxy S phone, presumably the Samsung Galaxy S4 or S IV), even though the S3 is still selling well. We’ve already written many posts now on the Galaxy S4 and have detailed leaks on specs and rumors of what may be coming as well as what we’d like to see. Just two of the things that we’ve already discussed are the possibility of a 1080p AMOLED display and an increase in display size for the Galaxy S4 and it does appear that these aspects are both looking more hopeful.

Many of the upcoming flagship devices will be touting full HD 1080p displays and the idea of Samsung bringing out the next Galaxy S phone without such a screen has been a point of interest to some people. Plenty of Samsung and Android enthusiasts are eagerly awaiting the Galaxy S4 and it really needs to compete with the barrage of other top-flight phones on the way. For some time now we’ve also discussed rumors of a larger 5-inch display for the Galaxy S4 and it does appear increasingly likely that both of these may occur.

At CES last week 1080p displays were very much in evidence for upcoming top-end smartphones including the Sony Xperia Z and HTC M7. It now seems that a 4.99-inch 1080p AMOLED display was featured at a Samsung roadmap stand although it doesn’t appear to have been widely spotted at the time. A photo was taken as evidence and you can clearly see it is labeled as a 4.99-inch display with a stunning 440ppi and underneath a launch date of Q1, 2013. 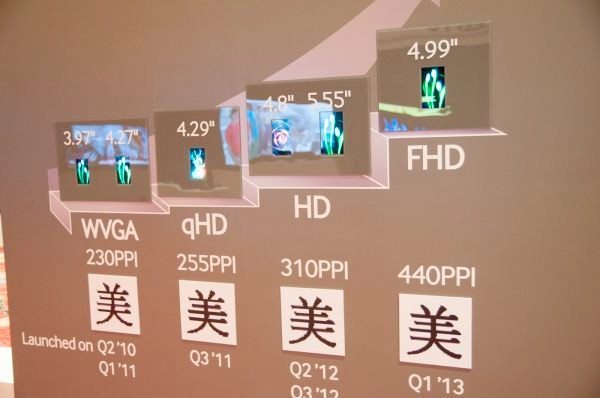 This indicates that Samsung is certainly capable of producing a phone with a 1080p AMOLED display and so as the Galaxy S4 is thought to be due around springtime it seems plausible to think this could benefit from it. The above image comes courtesy of AnandTech in an article that also brings news of curved displays as well as concept handsets. Two concept phones with curved (rather than flexible) displays were in evidence, with bends on the horizontal or vertical axis and although these kind of designs aren’t anticipated to arrive on the market soon it looks like they will appear at some time in the future.

There’s plenty of interesting stuff on the way from Samsung then and we’d certainly love to see one of the 4.99-inch 1080p AMOLED displays come to fruition for the Galaxy S4. What are your thoughts on this? Would you approve of the display size increasing from 4.8-inches on the Galaxy S3 to 4.99-inches on the S4? Are you pleased that Samsung looks to be able to match the 1080p displays coming to other impressive new smartphones?