The Sony Xperia S is nearly one year old and has been running on the Android Ice Cream Sandwich OS, some have even complained that this OS is buggy and it is in dire need of a new update. Well, good news comes to those that can wait patiently because around April time the long-awaited Android 4.1.2 JB update you have longed for will be released.

Sony is trying to score some brownie points with its customers, and one way of doing that is to give Sony Xperia S users the Android 4.1.2 Jelly Bean firmware update that will be released in April or possibly before.

We here at Phones Review actually forgot all about the Xperia S, we actually thought that this handset would no longer see any new updates, but the Android Jelly Bean 4.1.2 update breathes new life into the little gem. It goes to prove that the smartphone is capable of running JB, this new update will bring a new kernel version 3.4 compared to 3.08 kernel that is being used at the moment. 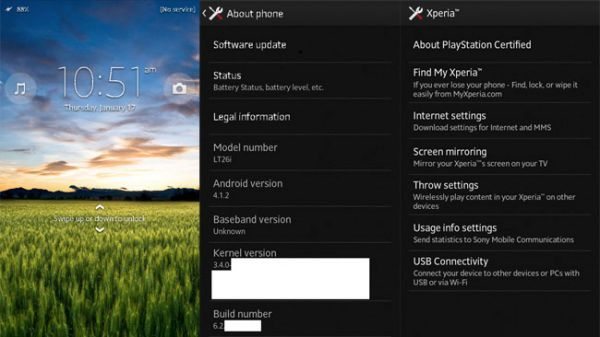 When this update finally hits the Xperia S new features will include Screen mirroring, Power management and Find My Xperia. The lock screen will be a new addition as well as standby mode new options. Users will be blessed with the likes of Google Now and so much more.

If you visit XDA Developers you can see screenshots of the Xperia S LT26i running Android 4.1.2, the update as said above is coming around April time but we are just waiting on Sony to give the thumbs up, soon as they do we will notify you. We have been looking around and asking questions about this new update and a few users of the Xperia S had a few things to say. One user hopes that Sony will provide a camera update that includes Burst Mode and Superior Auto, this can already be done if you root, just check for Cyber-Shot 5.1.1.

If and when the Sony Xperia S get’s the new Jelly Bean update we can see this being the last one, just have a hunch. Please do let us know if you are looking forward to the new JB 4.1.2 update or are you considering a new smartphone?