The annual CES event in Las Vegas has been and gone with only a few new smartphones being unveiled and now thoughts are turning to the Mobile World Congress that is being held next month. This is normally where various smartphone manufacturers showcase their flagship handsets that will be released throughout the year, and now we can tell you about a Huawei device invitation for the MWC 2013 February conference.

While we have already heard that Samsung won’t be unveiling the Samsung Galaxy S4 at MWC, but the guys over at GSM Arena have received an invite from the Chinese smartphone manufacturer, Huawei, and the date for the company’s press conference is being held one day before the show officially kicks off by taking place on February 24th.

Huawei’s invitation only gives a small clue what the company is set to reveal during the showcase with a small glimpse of a front frame design of a smartphone. The company has already announced some new hardware earlier this month at CES 2013 such as the 5-inch Ascend D2, the WP8 Ascend W1, and the Galaxy Note 2 rival the massive 6.1-inch Ascend Mate. 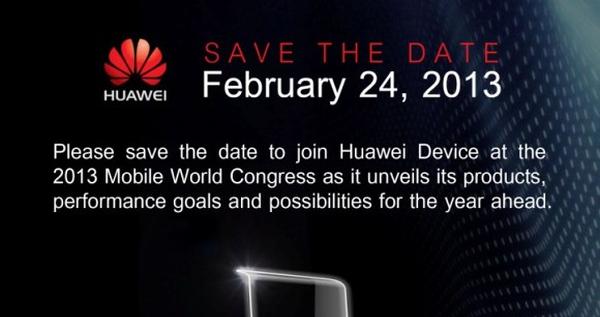 It is thought we may see next month the company’s flagship Windows Phone 8 smartphone the Ascend W3, which features a 4.5-inch display providing a resolution of 1280 x 720 and 326ppi pixel density that is powered by a dual core processor paired with 1GB of RAM. There is also believed to provision of a microSD card slot to boost memory by a further 32GB, and an eight megapixel rear facing camera.

To date the company hasn’t really made much of an impact outside of the Asian market, but with its line up that is due for release this year we could easily see this change. Will you be considering a Huawei smartphone this year?