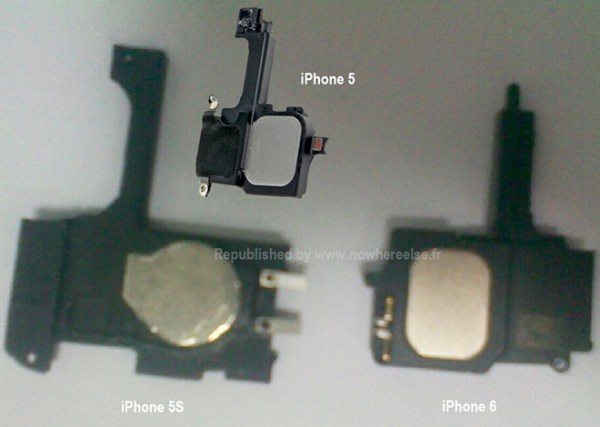 There are countless rumors surrounding Apple’s next iPhone and even confusion about the name the device will have. Initially we were unsure if it would be the iPhone 5S or whether Apple would jump straight to the iPhone 6 but more recently it seems that both could be appearing this year. Now we have heard that some supposed components from both the iPhone 5S and iPhone 6 have emerged, adding more speculation to the mix.

It was only a week ago that we learned of overseas reports saying that there would in fact be three iPhone releases this year. Two of those were said to be an iPhone 5S and another the iPhone Math, both due to launch by the end of June. Another model with a 12-megapixel camera was also reported to be due for release before the end of 2013. We were skeptical about an iPhone Math and we had previously heard about the possibility of a cheaper iPhone but none of these really seemed to fit that idea.

Following this we heard more speculation that an iPhone 5S, possibly with a 13-megapixel camera may be released in July but this didn’t fit with the previous rumor about the iPhone 5S, said to have an 8-megapixel camera. You can see then that this issue is already very complicated and going by all of the conjecture so far it’s impossible to know exactly what is on the way as there are so many conflicting stories. Very often when a new iPhone is on the way we begin seeing leaked images of components for the device and these photos came to light on a French tech blog, NoWhereElse.fr, as reported by Apple Insider.

It’s claimed that the images came from an inside source with Apple supplier connections and are of the loud speaker modules for the iPhone 5S and also the iPhone 6, one of which will be coming out in the next few months. Again, reports of three iPhones launching this year are repeated and it’s stated that the iPhone 5S will be a minor upgrade to the iPhone 5 while the iPhone 6 will be a more major overhaul. The iPhone Math also gets another mention as the third model and it’s said that this will have a larger display as was previously claimed, to contend more with the increasingly common ‘phablet’ smartphones.

This latest report varies from previously on release timeframes with one phone said to be arriving between March and July and the second launching in the late part of the year. It’s not possible for us to verify the component image, which is rather blurred but as we said earlier, many of these component image leaks do eventually turn out to be accurate. The image we’ve included above is supposedly the loudspeaker module for the iPhone 5S and the iPhone 6 superimposed with the comparative component for the iPhone 5.

It’s a very muddled story right now then regarding iPhone names, models and release schedules for the year ahead and we shall continue following developments on this. With Apple’s reputation for secrecy surrounding future products it may be a while before we hear anything concrete but for many waiting iPhone enthusiasts that time cannot come soon enough. Are you waiting for the next iPhone? Do you think there’s any truth in the claims that 3 iPhone’s will release during 2013? Let us know with your comments.